A couple of weeks ago we had an email alerting us that an old friend, “Tiny Magical Creatures”, aka Dawn Moses, was back on the prowl again, sending harassing messages to a YouTube user and generally kicking up a fuss in the online “reborn” doll-collecting community.

Ms Moses, long-time readers might recall, is a London-based fan of Abe and Ella, who took it upon herself in late 2015 to post multiple illegal videos featuring images of the Hampstead families who were alleged to belong to the imaginary baby-eating “cult”, as well as images of RD’s children. As a result, she was issued with a formal harassment warning by the police, and her YouTube channel was closed.

She made a brief reappearance in late December 2015, plastering a Facebook business page with false allegations that a Hampstead parent who had been associated with that business in the past was a Satanic paedophile and cannibal. We wrote about that at the time, but were asked to remove that post by people close to Ms Moses, who stated that she was mentally ill and would not be posting anything further about the Hampstead SRA hoax. Out of respect for this person, we agreed.

As we’ve frequently stated here, we have no wish to exacerbate anyone’s mental health problems by drawing further attention to them online.

However, it was brought to our notice yesterday that Ms Moses had begun writing about this blog on her Google+ page, apparently in relation to an ongoing feud over (of all things) a “romper” outfit which she’d purchased for one of her baby dolls, which she felt that another “reborn” collector had copied.

Yes. A romper. We shit you not.

We’re not sufficiently au courant with the “reborn” community’s ins and outs to know precisely when the feud started, but on 15 April Ms Moses posted this video titled “A live message for My Little World aka Katie the woman from the Czech Republic”:

Another YouTuber called My Little World posted this video, in response to death threats made by Ms Moses or her followers—we must emphasise that we don’t know which, but it seems to have been part of the Great Romper Melée—in which the woman’s husband and dog were threatened with violence. In the description under the video, the poster linked to our 2015 article about Ms Moses…

…and this spurred the following response from Ms Moses, on her Google+ page: 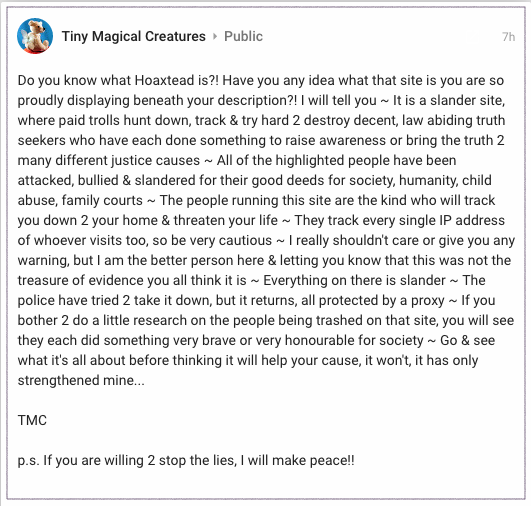 Do you know what Hoaxtead is?! Have you any idea what that site is you are so proudly displaying beneath your description? I will tell you ~ It is a slander site, where paid trolls hund down, track, & try hard 2 (sic) destroy decent, law abiding truth seekers [Ooh, rich! —Ed.] who have each done something to raise awareness or bring the truth 2 (sic) many different justice causes [We have? —Ed.] ~ All of the highlighted people have been attacked, bullied & slandered for their good deeds for society, humanity, child abuse, family courts [Oh God, I’m dying here —Ed.] ~ The people running this site are the kind who will track you down 2 (sic) your home & threaten your life ~ They track every single IP address of whoever visits, too [Nope. No can do. —Ed.], so be very cautious ~ I really shouldn’t care or give you any warning, but I am the better person here [Snort! —Ed.] & letting you know that this was not the treasure of evidence you all think it is ~ Everything on there is slander [Starting to regret removing that post now —Ed.] ~ The police have tried 2 take it down, but it returns, all protected by a proxy [Huh?? —Ed.] ~ If you bother 2 (sic) do a little research on the people being trashed on that site, you will see they each did something very brave or very honourable for society [Sick bag! Stat! —Ed.] ~ Go & see what it’s all about before thinking it will help your cause, it won’t, it has only strengthened mine… [Is this woman on drugs? —Ed.]

Let’s put it this way: if we were Ms Moses, we wouldn’t want anyone from the online dolly community reading a blog post about how we harassed a group of innocent citizens and had a wee visit from the police over it. We cannot imagine that this would play well with that community, who all seem quite law-abiding and non-trooferish.

We’ve heard from some of the doll community members, and have provided them with the contact number of the relevant police station. We’ll be following this story and will update our readers as events unfold.

Edited to add: Within two hours of our posting this, Ms Moses apparently had a change of heart and removed all her harassing videos; within another hour, the responses from My Little World were gone too. This has to count as one of the fastest turnarounds we’ve seen, but it does mean that our readers won’t be able to judge for themselves whether the videos were threatening in any way. On balance, though, we would prefer that the entire matter be resolved quickly and with as little police involvement as possible, so…yay?