It must be spring again—yet another blog has sprung up, this time from the loins of the Sooper Seekrit Facebook Groop™, in a lame attempt to “expose” those of us who research and write Hoaxtead Research.

Haters are nothing new to us. In 2015 there was something called “Trollstead”, which was voluntarily taken down by its owner when we clearly demonstrated that they were drawing an incorrect conclusion from the evidence at hand. Then last year there was a short-lived blog that rejoiced in the name “Hoaxteadresearchmessiahlawyer666” (again, removed by its owner for reasons unknown). Suffice to say, we’ve come to expect this sort of thing, and when several of our readers pointed out that “Hoaxtead Blog Satanists Exposed” was up and running, we weren’t terribly surprised. 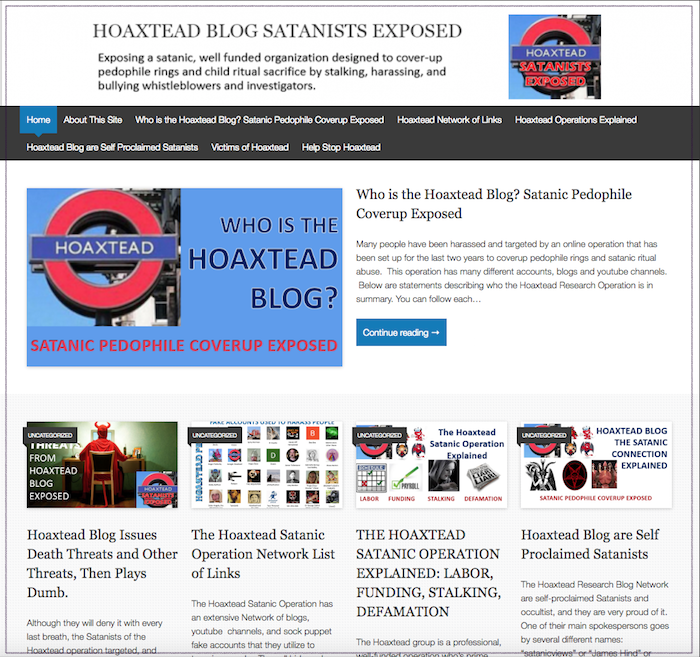 In case you’d like to check it out for yourself, we’ve saved an archived copy here, so you needn’t worry about inadvertently giving these clowns any extra page views.

The entire blog is a bit of a dog’s breakfast, full of the usual flawed assumptions, incorrect conclusions, and deranged hyperbole, but we’ll say this for it: because they copied the Hoaxtead Research template, at least it’s slightly more navigable, though not more readable, than Kristie Sue Costa’s early pathetic efforts. Seriously, has anyone ever managed to get all the way through one of her DDH posts?

Will the real Slim Shady please stand up?

Speaking of Kristie Sue, it seems that the authors of the new blog are great admirers of her work. We mean, they like it a lot. In fact, several of the posts are simply reruns of her brilliant deductive pieces. Even when the new blog doesn’t literally scrape her blog for material, they’re definitely singing from the same hymn sheet. You’ll no doubt recognise these old chestnuts, sung in a distinctly Yankee accent:

Honestly, we cannot be arsed to debunk any of this—we all know who we are, and we can’t help it that the Hoaxtead mobsters have seriously underestimated the number of people who are angered by their vicious and cruel hoax.

For overall amusement value, we recommend the page where the writer demonstrates to her own satisfaction that Hoaxtead Research is, like, totes a psyop run by like, agents or something. Fer shure.

So in case you were wondering, here’s how things work here at Hoaxtead Research: 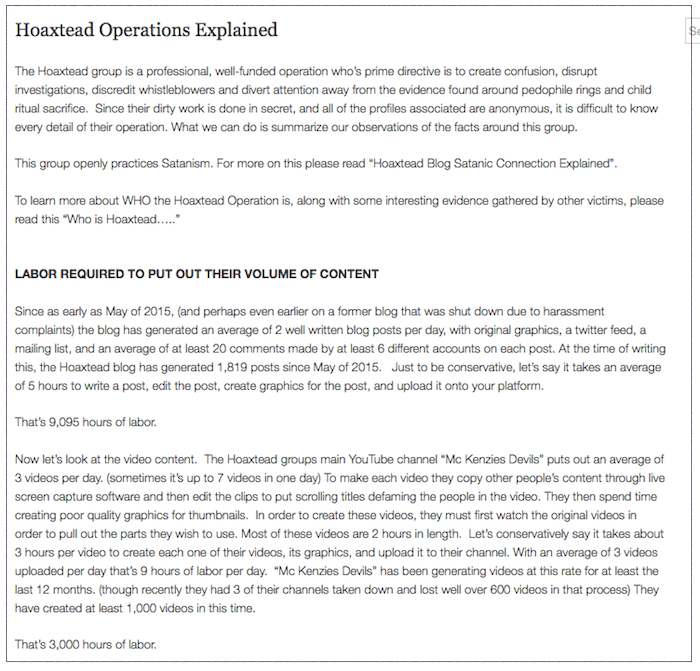 Wait, we all “openly practice (not “practise”) Satanism”? One of our regular readers definitely does, but to our knowledge, the rest of us span the spectrum of religious belief (including atheism).

Oh, and does anybody know the identity of the”former blog that was shut down (prior to May 2015) due to harassment complaints”? We’re wracking our brains, but can’t recall anything like that.

Thanks for stating that this blog is well-written, though anyone who reads it will know that most days we publish one post per day, unless extraordinary news breaks. As for the original graphics, we must thank our generous readers. And if we have a mailing list, it’s news to us.

Wait, what’s this? “At least 20 comments” per day? How about closer to 120? Sheesh. We know the educational system in America has faced massive underfunding in the past few decades, but you’d think Kristie Sue could at least count past her fingers and toes.

And speaking of toes, how long does she think it takes to put together a blog post? Five hours? Seriously? What does she type with, her feet? Around these parts, if El Coyote is off his feed a single post might take him an hour and a half, start to finish.

As for video content, we’ll say this again, though we realise it’s farting against thunder: McKenzies Devils are not run by anyone connected with HR. They are completely independent from this blog. Oh, and the fact that they are talented, fast, and efficient is hardly evidence that they’re up to anything nefarious. We don’t know how long it takes them to produce their videos, but we’re sure they’re laughing just as hard as we are at KSC’s estimates. Now here we really must draw the line. Twenty comments per post? Hardly. More like 120. Our readers use this as a discussion board, and we welcome them.

Oh, and the fact that comments begin to appear shortly after we publish our post of the day is easily explained: a number of our night-owl readers hover around their computers at around midnight, waiting for the next day’s post to appear. Not to be all braggy ‘n’ shit, but apparently they think our posts are worth it. Unlike certain other blogs we could name.

“This is the pattern of a professionally run operation”…Really? Is it? Wouldn’t know. Never seen one. 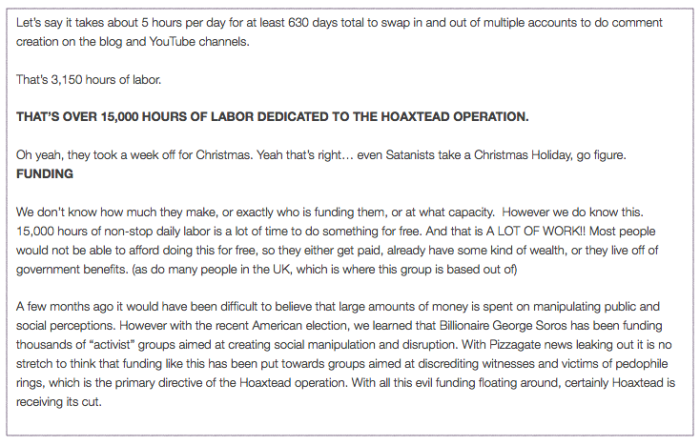 “Let’s say it takes about 5 hours per day for at least 630 days total to swap in and out of multiple accounts to do comment creation on the blog and YouTube channels”. Well, we suppose it might, if that’s what was happening. Since our commenters are real live people, we’re afraid this statement comes under the heading of Utter Bunkum.

“15,000 hours of non-stop daily labor (not labour) is a lot of time to do something for free”. Indeed it would be, if Kristie Sue’s estimates had not emerged fully formed from her rear nether regions.

And speaking of doing things for free, we wonder how much time Kristie Sue and her troll buddies devote to scouring the internet for “evidence” that Satanist reptilians rule the world, raping and murdering babies in order to feast on their adrenal glands or whatever it is they’re supposed to do? 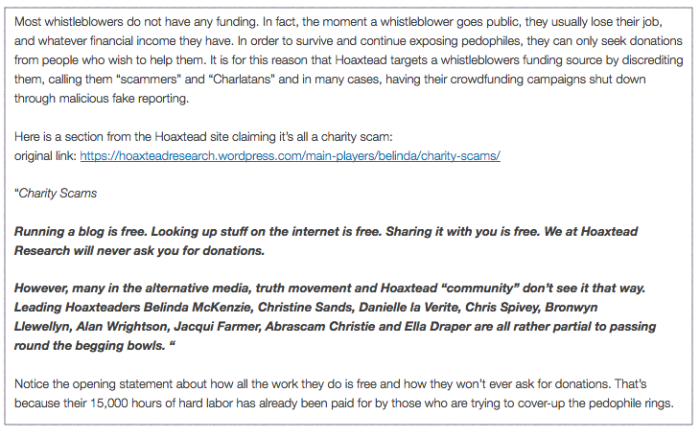 Oh, here’s a gem: “The moment a whistleblower goes public, they usually lose their job, and whatever financial income they have. In order to survive and continue exposing pedophiles (not paedophiles), they can only seek donations from people who wish to help them”.

Is that a fact? We’d very much like to know the precise number of so-called whistleblowers who’ve lost their jobs and are now spending their days looking for imaginary tunnels under a pizza parlour in Washington DC, or harassing innocent people in a suburb of London. Funnily enough, we’ve never actually met one of these mysterious newly unemployed whistleblowers.

We have met any number of scammers and charity fraudsters who’ve attempted to jump aboard the Hoaxtead gravy train, exploiting images and videos of two physically and emotionally abused children for their own ends. But that’s not really the same thing, is it? 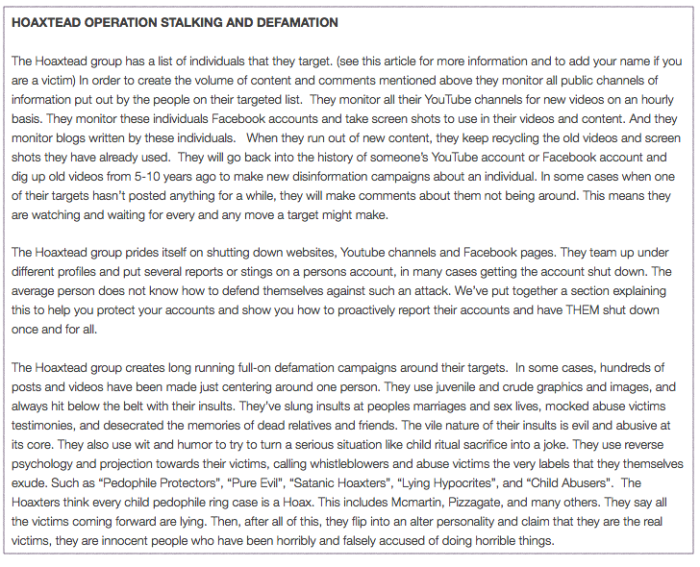 Yep, we do keep an eye on what the Hoaxtead mobsters are doing. We’ve learnt the hard way that ignoring them and letting them get away with their shenanigans just encourages them.

By the way, Kristie Sue, it’s not necessary to “monitor all their YouTube channels for new videos”. There’s this amazing new technological advance called “subscribing” to someone’s channel, so that you receive “alerts” when new material is published. You might want to look into that.

Oh, and yes, we do think that McMartin, Pizzagate, and many other alleged “SRA paedophile rings” are fake. That’s because we follow a little thing called “evidence”, which always trumps ideology in our books. 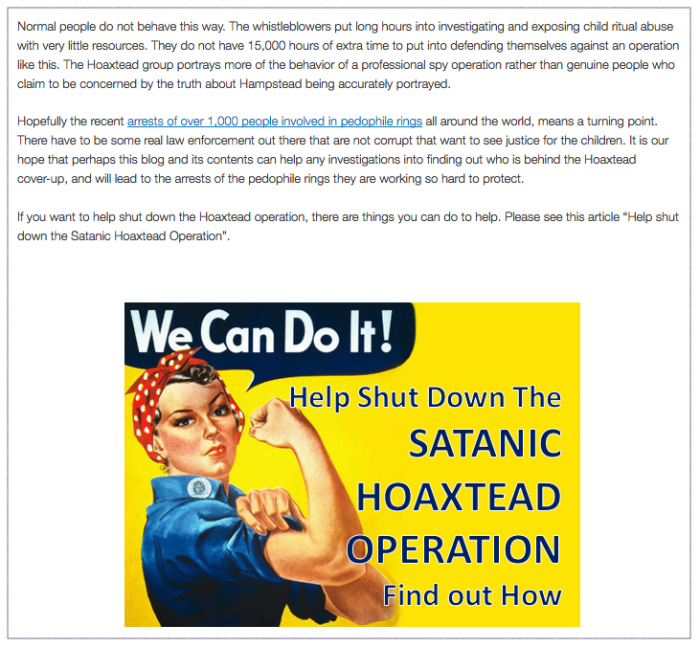 “Normal people do not behave this way”…oh dear, where to even begin.

When people are motivated by the belief that they are combatting something truly evil, something which could, if left unchecked, destroy hundreds or thousands of innocent lives, then yes. They can become very dedicated indeed. We know that those who research and write this blog believe very strongly in what we’re doing. And we know that we’re winning…which is probably why Kristie Sue, Sonya, et al were motivated to throw together their new blog.

The link at the end of the above post promises to take the reader to an article titled “Help shut down the Satanic Hoaxtead Operation”. Out of curiosity, we clicked the link. (Yes, this is how far we are willing to go for you, our loyal readers.) Here’s where it took us: 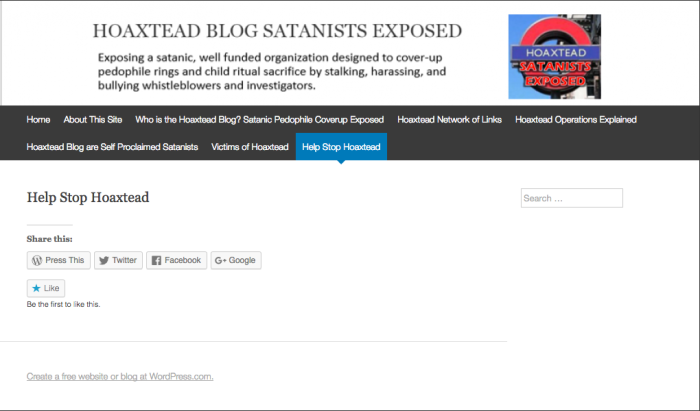 You can’t make this shit up, can you? 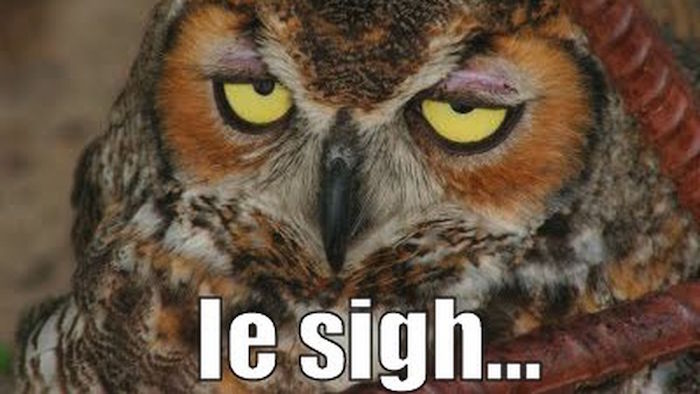 122 thoughts on “Watching the defectives”