By now many of our readers will already know that Alex “Puffy” Jones, American blowhard extraordinaire who never met a conspiracy theory he didn’t like, has issued an apology regarding his involvement in pushing the Pizzagate fraud.

In a surprising and rare bit of backtracking, Jones posted a six-minute video on his website, “InfoWars,” in which he read a prepared statement formally distancing himself and his site from what became a textbook story of fake news run amok. He addressed his apology to James Alefantis, the owner of Comet Ping Pong, the restaurant that was the supposed locale of the alleged conspiracy last year.

The text of the statement, in which Mr Jones apologised to Mr Alefantis (though he failed to do the same to Hillary Clinton or John Podesta), had a distinct lawyerly ring to it. The Post speculated that the timing of Mr Jones’ statement was not coincidental:

Jones didn’t say what prompted his apology but it may have been motivated by a letter Alefantis wrote to him in February. The letter demands an apology and retraction for InfoWars’ postings about Pizzagate; it does not threaten legal action, but refers to what Alefantis describes as “defaming” comments by InfoWars.

But the timing of Jones’s apology suggests he was concerned about a potential lawsuit. Under Texas law, the Austin-based Jones had to retract or apologize for the stories by Friday — one full month after receiving Alefantis’s letter — to avoid exposing InfoWars to punitive damages in a libel suit.

Mr Jones’ lawyers might have reminded their client of the US$140,000,000 in damages that were awarded to Hulk Hogan last year by online magazine Gawker, which published a “celebrity sex tape” showing Mr Hogan having sex with a woman. The lawsuit crushed the website: within weeks, Gawker had shut down. Mr Jones, or his InfoWars site, would certainly not be immune to such an outcome, and he must surely be aware of this.

The fact is, while the internet has operated as a kind of wild west for the past 20 or so years, it’s now being forced to come to grips with the legal realities that face any publisher, in any media. Just because one’s venue happens to be digital rather than paper, radio, or television, doesn’t mean it’s possible to get away with violating people’s privacy, telling lies about them, or defaming their character.

Regular HR commenter Ghost of Sam has filled us in on a landmark court decision in Australia, in which internet colossus Google was taken to court by a private citizen, Dr Janice Duffy. She sued Google for defamation, and for failing to remove links to defamatory material from their search engine. While Google was only ordered to pay $100,000 plus interest in damages, the legal costs were astronomical—and an important legal precedent was set. When barristers representing YouTube, Facebook, and Twitter showed up as “observers” in the courtroom, it became clear that this case was being carefully watched by the major social media platforms: 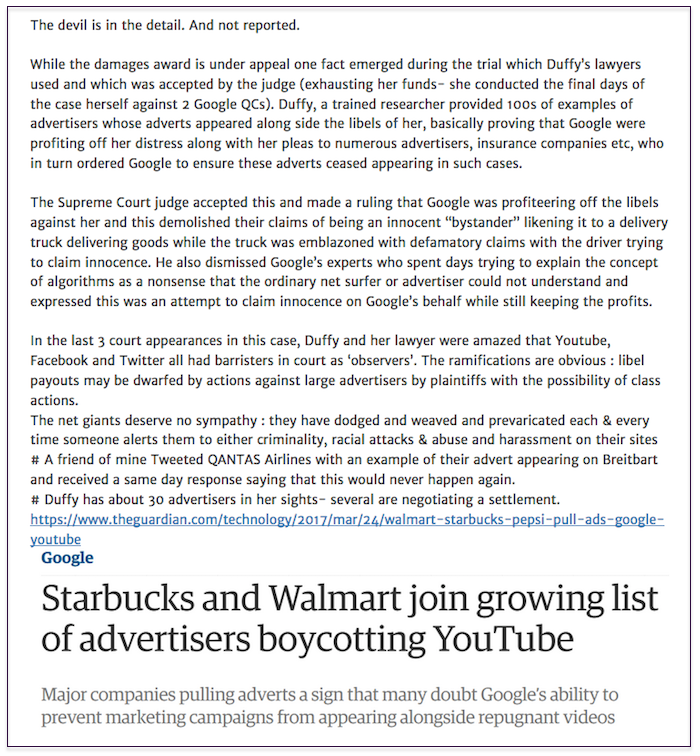 But libel suits, no matter how costly or high-profile, will likely not spell the end of the current wild west regime. Ultimately, real change on the internet will only come about when profits are at stake.

As GoS points out, when advertisers were made aware that their products and services were being linked with material that defamed Dr Duffy, they began ordering Google to ensure that this practice was halted, and threatening to withdraw their advertising revenue if it wasn’t.

In the past month or so, various advertising agencies have started making good on their threats to pull their money out of adverts that appear on offensive or extremist videos on YouTube. Google and its subsidiary, YouTube, have been dealt a number of devastating losses. For example, The Guardian reports that Havas, the world’s sixth largest marketing services group, which spends about £175 million per annum on digital advertising on behalf of its UK clients, has pulled its business from Google and YouTube.

The trade journal Silicon Valley Business Journal states, “McDonald’s UK, retailers Marks & Spencer, Sainsbury’s and Argos and banks HSBC and RBS have stopped ads on Google sites, according to Reuters. The British government also suspended ads on YouTube after its public sector ads showed next to videos with homophobic and anti-Semitic messages. Others brands, including Vodafone, Barclays and Tesco, are reviewing their ad policies”.

And Tech Crunch reports, “AT&T and Verizon are the latest companies to pull advertising from Google’s display network amid concerns that it does not do enough to prevent ads from appearing on YouTube videos promoting terrorism and hate speech”.

All of this could be very good news for those of us who’d like to see the abusive and illegal images of RD’s children, and the names of other Hampstead children, removed from the internet.

With advertisers deeply sensitive to the prospect that their money could be used to fund illegal material online, and YouTube and Google smarting over recent losses, now is the time to apply pressure on the advertisers whose names appear, for example, on the recent SGTReports video. Over the next few days we’ll start compiling a list of advertisers, and we welcome our readers’ input into how best to approach them to ensure maximum impact. We’ve had some remarkable success at having defamatory and illegal material taken down in the past—and this could be our big opportunity to finally deal with YouTube and Google’s apparent unwillingness to act in the best interest of the children of Hampstead.

194 thoughts on “Facing the music: How to hit the internet where it hurts”