There’s a certain fascination in listening in on a conversation amongst those who have decided to believe in the Hampstead SRA hoax: they blurt out the most bizarre stuff with the intense earnestness of a group of three-year-olds who are utterly convinced of the reality of the Easter Bunny.

Take this recent convo from Kristie Sue Costa’s Facebook page, where she and her posse are trying to work out the meaning of Angela Power-Disney’s recent interview with Arthur Kaoutal: 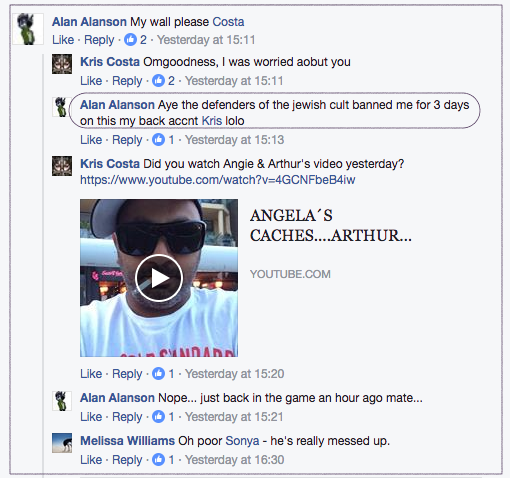 Alan: “Aye the defenders of the jewish (sic) cult banned me for 3 days on this my back acct Kris lolo”: So apparently Alan believes that a) there is a cult, b) it is Jewish, and c) it is vigorously defended by…Facebook? We suppose this would explain why Facebook is so diligent about taking down all the illegal posts we report.

Oh, wait. They don’t do that, do they? Well, so much for that theory.

Ann Muller: “Why are they controlling the case. Why would they do that?”: Wait, who controls the case? The “defenders of the jewish (sic) cult”, i.e. Facebook? Why did no one tell us that Facebook was actually in charge of this whole thing? Why are we always the last to know?

Kris Costa: “Because of the people they work for. Ever since E & A disassociated from Hampstead Research back in July 2015, Jacqui Farmer has been out trying to implicate Ella as being the abuser…I’ll post a vid…hold on a sec.”: All right, let’s see if we’re following this. Facebook, aka the “defenders of the jewish (sic) cult”, works for…someone. People. And somehow, this is linked to Jacqui Farmer trying to implicate Ella. Okay, then. We think we’re following you. Sort of.

Ann Muller (describing Angela): “APD is either stupid or evil or both, in my opinion….Something or somebody must have a huge hold over her?”: Mmm, nope. You were right with the first guess, Ann. Stupid or evil. The only thing that has “a huge hold” over Angie is her own ego.

Kris Costa: “I agree with you about the grandparents, they were obviously very worried during the video interview with Belinda”: Yes, they were! And they were also very clear that they did not believe their daughter’s insane story about a cult sexually abusing their grandchildren. Just sayin’. 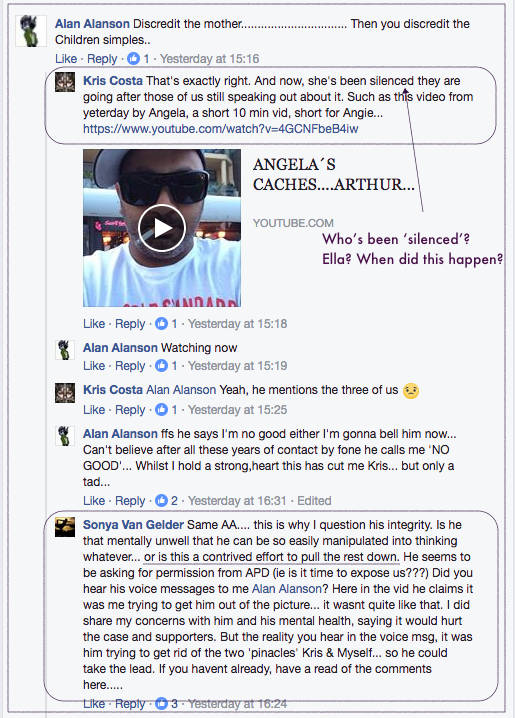 Kris Costa: (speaking of APD’s dastardly plot to discredit Ella) “That’s exactly right. And now, she’s been silenced they are going after those of us who are still speaking out about it….”: Did we miss some important development in which Ella was somehow “silenced”? How did this happen? And if she was “silenced” by Angela’s story that Ella took part in a video of child sexual abuse, does that mean that Ella really did it?

Sonya Van Gelder: (speaking about Arthur K.) “Is he that mentally unwell that he can be so easily manipulated into thinking whatever…or is this a contrived effort to pull the rest down.”: Anyone who followed Arthur’s escalating rants over the weeks before he was finally hospitalised will know: that was one very unwell man. In fact, one of our team who’s had experience dealing with this kind of thing says that Arthur was in the throes of an acute manic episode. People who are that mentally ill aren’t really given to plotting and planning for the delectation of people like Kristie Sue and Sonya, no matter what they might think. Arthur is where he needs to be right now, and anyone who really cared about him would understand and support that. 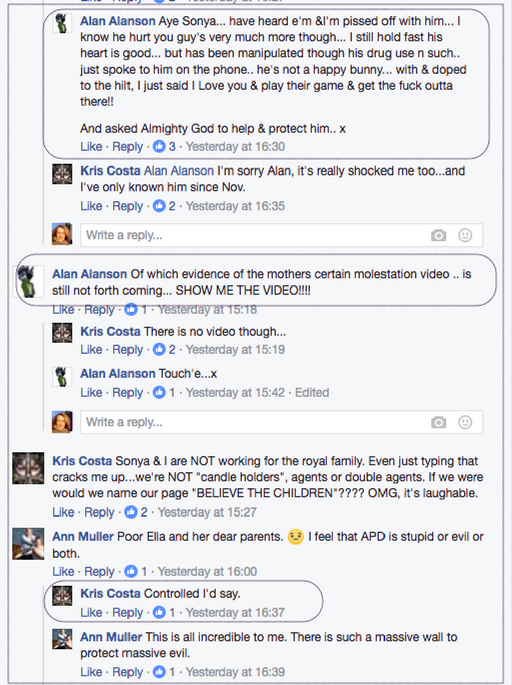 Alan: “Of which evidence of the mothers certain molestation video..is still not forth coming… SHOW ME THE VIDEO!!!!”: So…is Alan Alanson actually demanding to see a video featuring graphic depictions of child sexual abuse? It certainly sounds that way to us!

Here’s a bit of advice for you, Al: expressing a desire to watch commercial child sex abuse videos is generally frowned upon by the authorities. People go to prison for that sort of thing. You might wish to rethink this, old son.

And one last peep from Kristie Sue: “Controlled I’d say.”: What is it with these people are their “controlled individuals”? Can they not simply accept that APD is a Grade A, Number 1, First-Class Bitch? Occam’s razor, people. Occam’s razor.

We’ll leave it there for today, but you get the idea: eavesdropping on Hoaxtead mobsters is a bit like watching the monkeys in the zoo fling their poo at one another…except monkeys have a certain innate dignity. Plus they didn’t volunteer for the gig.

149 thoughts on “Eavesdropping on the Hoaxtead mob”