If the Hampstead SRA hoax has a spiritual predecessor, we’d have to say it was the McMartin Preschool case, which heralded the 1980s daycare Satanic panic. We’ve talked about McMartin here before, and would like to draw your attention to this post from August 2015, which details what happened to one of the alleged McMartin victims, and how he felt about it as an adult.

Apparently this case recently came to the attention of Sooper Slooth™ Kristie Sue Costa, who posted this link to her “Believe the Children” page on Facebook: 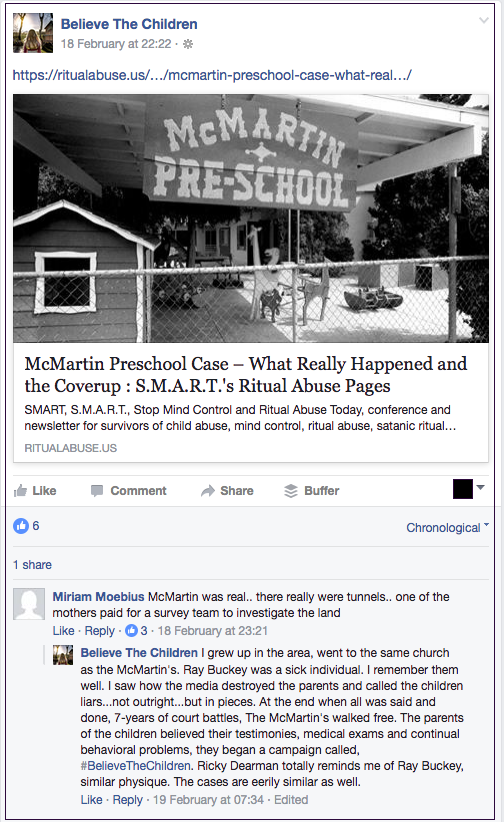 Yep, Kristie Sue was very familiar with Ray Buckey, who was tried and acquitted of child sexual abuse in what has been called the longest and most expensive trial in American history. She knew him well enough, in fact, to be able to authoritatively claim that he was a “sick individual”.

Of course, we’d estimate that Kristie Sue was perhaps 11 years old at the time, so it would make perfect sense that she’d be so well acquainted with Mr Buckey, and that she’d have been paying close attention to the media coverage at the time, rather than focusing on normal 11-year-old activities like having crushes on Scott Baio.

But never mind. Ray Buckey and RD had “similar physiques” to one another (according to an 11-year-old girl), so that’s clear evidence that he must have been guilty. Also, all the conspiranoids say it’s so; and who is Kristie Sue to actually do any research of her own? Better trust the experts.

Incidentally, if you’d like a glimpse into what the media actually said about McMartin at the time, have a look at this video:

Both McMartin and Hoaxtead involved horrifying yet ludicrous allegations against a group of innocent people, backed up by no forensic evidence whatsoever.

In McMartin, it was allegations that children were being flushed down a toilet into subterranean tunnels (none of which were ever found, even after the school was demolished), that Ray Buckey could fly around the room, and that children were being abused in airports, secret tunnels, and bowling alleys. All without anyone noticing a thing. Amazing.

There are other similarities as well: here’s an excerpt from a post we ran a couple of months ago, in which regular commenter Iamichabod (the artist formerly known as Justin Sanity) outlined some of the Byzantine shenanigans that ultimately led to the U.S. Satanic panic of the 1980s:

….Jackie McGauley was one of the McMartin Preschool case parents. She claimed that her daughter had been abused by the owner’s adult son, Ray Buckey. McGauley also happened to be best friends with Judy Johnson, the McMartin mother whose claims about her young son Matthew being sodomized—and she suspected, by Bucky—are often cited as the origin of that case.

There has been a lot of analysis and speculation about Johnson’s mental health, possible addiction problems and parental competence over the years. Sometimes she is depicted as a delusional hysteric, whose fantasies of child abuse supposedly fuelled the original Satanic ritual abuse panic.

This is not the objective truth of the matter, however. The truth is that Johnson’s friend Jackie McGauley was, by her own words, the real “SRA typhoid Mary” of the preschool/ daycare/ foster care SRA panic.

In fact, the most likely perpetrator of whatever abuse Johnson’s son and McGauley’s daughter might have suffered would not be Ray Buckey; it would be the boyfriend Jackie McGauley had at that time. McGauley and Johnson’s children were frequently play-date visitors at each others’ homes, and sometimes unaccompanied by their own parent.

It is very plausible that both McGauley’s child and Johnson’s son were occasionally looked after, in McGauley’s home, solely by this boyfriend when McGauley was out of the house. And unlike Ray Buckey, for whom no objective evidence documenting a sexual interest in little children was ever presented, McGauley’s boyfriend left behind a copy of the infamous “Lollitots” CSA images magazine amongst other possessions in her house after they broke up.

That’s objective evidence. McGauley did accuse this boyfriend of molesting her daughter, prior to when she believed that Buckey must have done so, but she never mentioned that this boyfriend would have had unsupervised access to Matthew Johnson as well.

It is true about Pazder introducing the idea of SRA to us. Some read his book later, I never read it through. It was Michelle’s case and I don’t particularly like to read stuff about other people’s cases. Larry was introduced to a small group of parents in the early 80s by 20/20 producer Ken Wooden who did the series on our case. Ken did a whole show focusing on satanism (some words I refuse to capitalize.. like satanism and ted just out of principle.) Larry went back to Canada but Ken talked extensively to parents about the idea of satanism.

Jackie McGauley organized the first “SRA child victim’s parents group”, which she called “Affirming Children’s Truth”, and held the first lay-led for-profit conference on the subject. By 1987, McGauley was living with clinically paranoid “satanic abuse and murder cults are everywhere, and they run our society” retired FBI agent Ted Gunderson.

Jackie McGauley/MacGauley is the “McMartin mom” who commissioned the excavation, fronting for her boyfriend Ted Gunderson who was perpetually broke.

Interestingly enough, Jackie McGauley would later turn on Mr Gunderson, and would accuse him, too, of having sexually abused her children. According to her sister:

Jackie said her child was molested by:

Accused Manhattan Beach Police officers of being involved in a child porn ring (timeline, 1984)
Ted Gunderson (1) Vindictive attempt to discredit him after the breakup.
Supposedly embezzled $30,000 from her
Accused him of killing some guy named Rick Post on one of those extremist web sites (1)
“FBI Ted Gunderson had sex with 12 year old at Satanic Ritual in 1972” here
Ted was eventually accused of poisoning Jackie, after they both accused satanists of poisoning them both.
A partial list of charges and general bitching listed on the “Crazy Stuff” page, some serious, some just the babbling of a crazy, vengeful woman who did not realize how this will look for eternity on the web.
She carried this on at least until 2010 and beyond.

**Quote about the Richstone School accusations:
“Police were unable to get much information from the child; most of it came from the mother. Charges were not filed against the therapist and the incident never became public.”

Just like Abraham Christie and Ella Draper, the self-described “SRA Typhoid Mary” of the McMartin Preschool case turns out to have been an equal-opportunity accuser, tossing around false allegations like confetti.

Kristie Sue and her fellow conspiranoids seem to be obsessed with tunnels: tunnels under the McMartin Preschool, tunnels under the school in Hampstead, tunnels under Comet Pingpong. And yet, if you look at this analysis of the excavation which Jackie McGauley and Ted Gunderson (then still lovers) oversaw, it’s clear that no tunnels existed under McMartin. Rather, it’s likely that what were initially identified as “possible tunnels” were in fact trash pits, common in rural areas. (The preschool was in an urban area by the 1980s, but when it was built in the late 1930s/early 1940s, it was definitely rural, as evidenced by its septic tank and lack of connection to the Manhattan Beach sewer system.)

Fascinating that the McMartin case, like Hoaxtead, appears to have been driven by a small cadre of people who were determined that the world should accept their wild stories, no matter what the evidence (or lack thereof) said, and no matter what the personal cost to those they falsely accused. 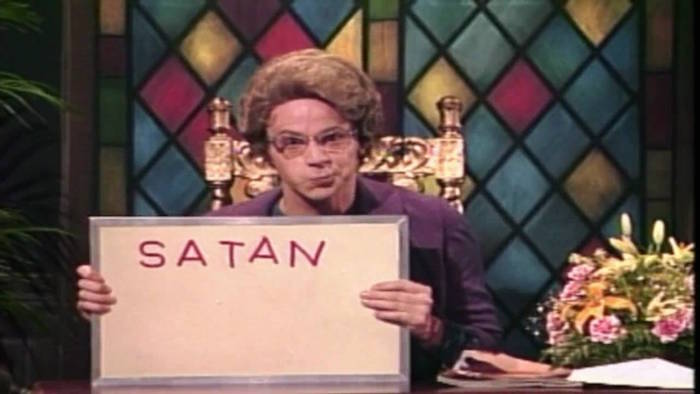 156 thoughts on “McMartin and Hoaxtead: More alike than you might think”