Last week, this blog received an email from Mel Ve, co-owner of the Conscious Consumer Network (CCN). Attached to that email was a transcript of Skype texts between Mel and Angela Power-Disney, who was sacked from CCN in January. We’ve been bringing our readers excerpts from that transcript, in an effort to better understand the dynamics of what went on behind the scenes.

Yesterday we received another transcript from Mel: this one contains the Skype conversations between Mel and Angela’s American protegée Sandy Goodridge-Bergen, who was sacked from CCN just before Angie was. Mel’s cover note stated that she’d removed sensitive financial information from the transcript, as she doesn’t want anyone taking advantage of Sandy for her money. We agree: we think the following will illustrate just how vulnerable Sandy is.

From her first Skype convo with Mel, Sandy seems a little…off:

We realise that Mel and Biggi are used to dealing with people with an extreme “new age” bent, but when Sandy alleges here that “there’s a good chance (she’s) being manipulated”, and that she “wasn’t too keen on subliminals being flashed across Biggi’s screen” during an interview, she’s exhibiting delusions or hallucinations, in addition to something psychologists call “ideas of reference”.

When Sandy claims to have seen something flashing across Biggi’s screen, that’s either a delusion or an hallucination—essentially, a non-real event that was created by her own brain. And when she says she’s “being manipulated” and refers to the illusory “subliminals” as somehow relating to her, she’s showing that she has ideas of reference. Ideas of reference describe the belief that innocuous or ordinary is somehow directed at the individual. While many normal people can exhibit these symptoms in the absence of mental illness—during a high fever, for example—we’d suggest that it’s an early warning sign of mental illness.

That said, Mel tries to calm Sandy down, offering her support and trying to reassure her:

Sandy describes the “subliminals”, and admits that she “see(s) things other people don’t see, such as beautiful orbs of energy in the sky that float and move gracefully back and forth in the sky”. Okay, so visual hallucinations, then.

The next warning shot comes a week and a half later, while Mel and Sandy are discussing whether Sandy can respond directly to the text comments during her shows. Mel shares a comment that was received but deleted:

While this could conceivably have come from anyone, Sandy says she knows exactly who it is: it’s her daughter’s best friend, pointing out that Sandy has drug addiction issues and has become estranged from her daughter and grandchildren. Sandy reacts with seeming indifference. Later in the same conversation, she says that the commenter “has her kid in the program too, same as my daughter”. By “program”, she means “MK Ultra”, the programme she claims to have been forced into:

One might think that a mother and grandmother would be deeply distressed at the thought of her daughter putting her grandchildren into a programme that is alleged to engage in horrific psychiatric torture and mind control techniques, but Sandy seems quite nonchalant about it, as though announcing that her daughter likes milk in her coffee. She then changes the subject to discuss the show she’s planning for the winter solstice festival. Strange.

Again, Sandy shows more delusions (“they listen to everything we say”) and ideas of reference: she thinks the son of the man she cares for put an American flag up on the garage in some sort of gesture aimed at psychically attacking her.

Later the same day, Sandy texts again. Angie has told her she looked either exhausted or high on her last show; what does Mel think?

Mel tries to offer some practical advice, tactfully explaining that “being fresh and balanced” (i.e. not high as a kite) “helps to control rapid eye movement and blinking”.

Later that day, Sandy reports that she has started seeing “creepy stuff in the paneling”. Strangely, her phone cannot seem to pick it up…quite possibly because it’s not there?

A couple of weeks later, Sandy is once again focussing on the “creepy” paneling in the house where she’s staying: 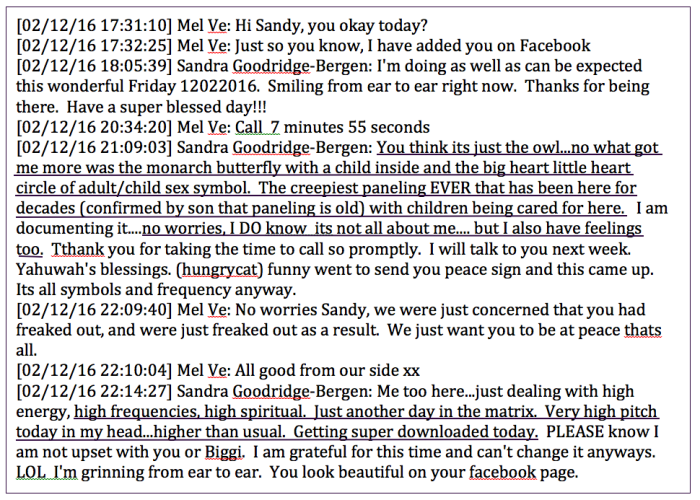 While we have become accustomed to people who claim to see “occult symbolism” where none exists, it’s really not something most normal people do. And in Sandy’s case, her messages seem to be filled with references to strange delusions—such as “getting super downloaded today”. This seems to refer to her belief that some unnamed person or persons can read her thoughts and “download” them without her permission.

The Skype transcript is full of conversations in which Sandy barrages Mel with demands for support, interspersed with bizarre claims: 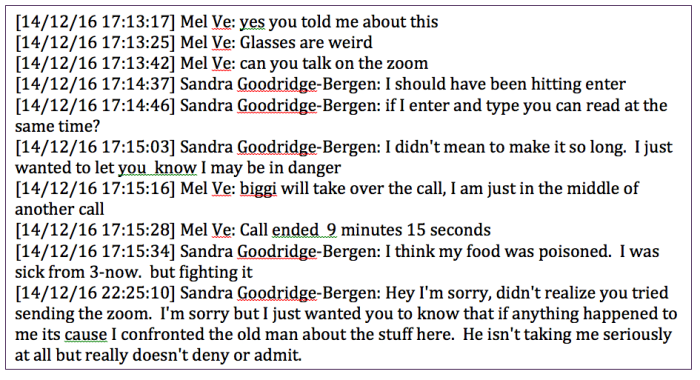 Looking back over the transcripts, it’s very clear that Sandy is a very troubled person. She’s emotionally volatile, requires a great deal of time and attention, and seems to have some symptoms of serious mental disorder.

We should say here that we don’t think Mel should necessarily have had the insight or knowledge of mental illness to flag Sandy, take her off the air, or get her the help she needs. Anyone who has ever lived with someone with mental health problems or addictions will confirm that it’s incredibly difficult to know how to react in a truly helpful way, and Mel was clearly trying to do her best by offering support.

Tomorrow: The final meltdown, and how Angela helped nudge things along. Stay tuned!