On 14 February 2017, this blog received an email from Mel Ve, co-owner of the Conscious Consumer Network (CCN). Attached to that email was a transcript of Skype conversations between Mel and Angela Power-Disney, who was sacked from CCN in January. On Thursday we looked at a few of the points of conflict leading up to Angie’s being dumped from Mel and Biggi’s roster. Yesterday we look at the final conflict, and some of the immediate fallout from Angie’s break-up with Mel. Today: What Angie and Mel really said about Sandy Bergen.

When Angela Power-Disney and Sandy Bergen collaborated on that video in which they each read out various damning messages Mel Ve had sent them, Angie was forgetting a teeny-weeny detail: she’d already engaged in some interesting gossip about her helium-voiced American friend, in a prior conversation with Mel.

This conversation occurred in early January 2017: Angie texts Mel to let her know that Sandy has been in touch, and seems to be in some sort of crisis.

Angie agrees that Sandy’s allegations do sound pretty bizarre and paranoid. She also lets on that she knows Sandy is in possession of a largish amount of money.

Hint to Sandy: never tell Angie you have money. Seriously, it’s like telling bees you have honey—you’ll never get rid of her.

Angie allows as how Sandy can be a bit grandiose at times, then admits that she might be the same way. Seriously, Angie? We’ve never noticed that about you. [snicker]

Angie states that Sandy was lying when she told Mel that Angie had asked her to pay her broadcast fees: Angie says Sandy offered to pay them, and Angie nobly turned her down, but then later asked if the offer still stood. Sandy said it did, but then turned around and said she was tight for money. Then Sandy gave Angie a blast for stating on Facebook that she wasn’t on benefits; Sandy took this as a potshot at herself, which Angie claims it wasn’t.

So was Angie perhaps paying less for her broadcast fees than Sandy? Sounds like it here. Funny that she wouldn’t share that.

Right, the “projecting rage” she endured from Jockney Rebel when she stayed at her home over Christmas, destroyed several of her belongings by leaving lit cigaretts lying about the place, and then failed to either apologise or replace the damaged articles? We really cannot see why Jockney might be peeved about that. Why wasn’t she just able to relax and bask in the honour of having Angie as a house guest? Some people!

Goodness, Angela seems to have a great deal of knowledge about, and interest in, Sandy’s finances!

Note that Angie agrees here that Sandy sounded off her head on at least one of her shows. 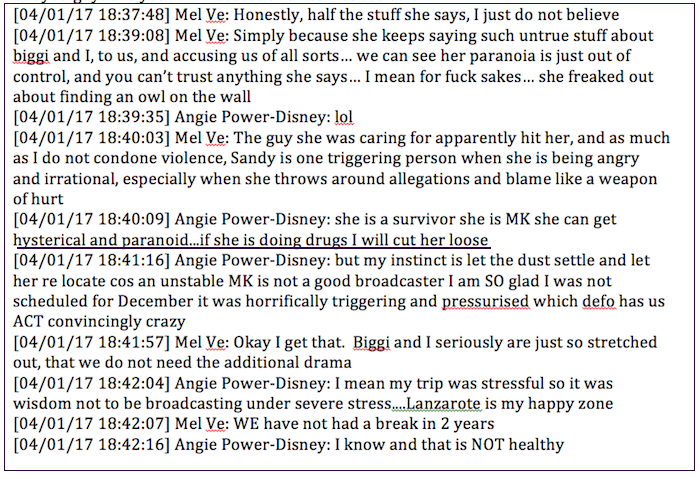 Angie also agrees that Sandy can get “hysterical and paranoid”, and states that if she’s “doing drugs (Angie) will cut her loose”. We wonder whether Sandy is aware of this? 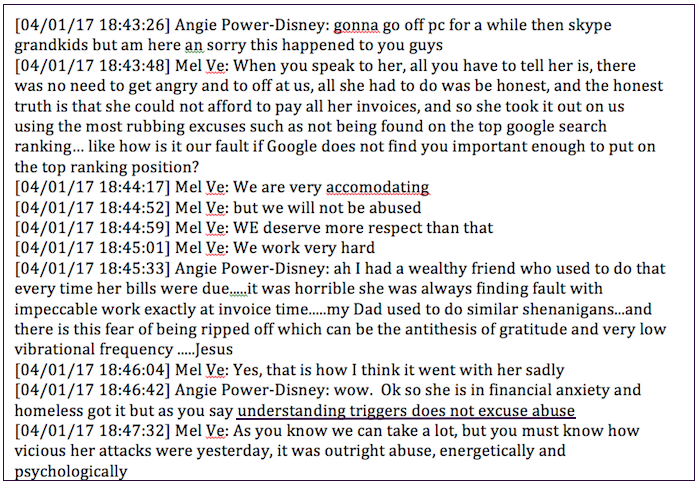 Ooh, really, Angie? “Understanding triggers does not excuse abuse”? We’ll keep that in mind for your next meltdown, shall we?

Note that this is the point at which Mel states that Sandy “was just a crack whore who did a lot of bad stuff for her addiction”.

And Angie leaps to Sandy’s defence, saying she’s not a crack whore at all, and that’s very unkind of Mel to say, and really, she should think about this sort of thing before blurting it out.

And then (surprise, surprise!) she trots out her old allegation that she receives hundreds of death threats, and should be rewarded for “cheating” them (by staying alive, we presume). Here’s a deal for Angie: show us your death threats, give us convincing evidence that they come from anyone associated with this blog, and we’ll give you the bloody award. Er, “acknowledgement”. (And sorry, saying we disagree with you does not count as a death threat.)

So there you have it: Angela didn’t exactly leap to Sandy’s defence—in fact, she agreed with Mel on almost every point. She says Sandy was being irrational, paranoid, and untruthful, not to mention stingy with her alleged “small fortune”, and she doesn’t object when Mel makes the “crack whore” comment.

Kind of puts the video that Angie and Sandy made into a different light, we think. 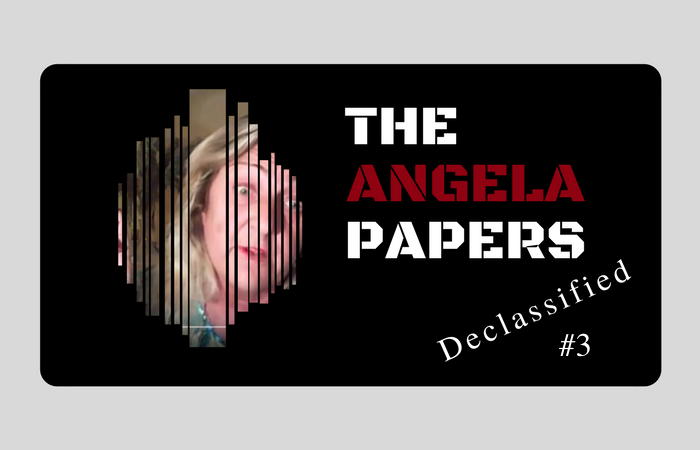 114 thoughts on “The Angela Papers, Part 3: The Sandy problem”