On 14 February 2017, this blog received an email from Mel Ve, co-owner of the Conscious Consumer Network (CCN). Attached to that email was a transcript of the Skype conversations between Mel and Angela Power-Disney, who was sacked from CCN in January. Yesterday we looked at a few of the points of conflict leading up to Angie’s being dumped from Mel and Biggi’s roster. Today we’ll look at the final conflict, and some of the immediate fallout from her break-up with Mel.

When we left off yesterday, Mel had just finished giving Angie proper hell for attempting to “help” CCN by demanding that they run things her way—including handing over passwords. A couple of days later, on 20 January, Mel attempted to contact Angie again, with what sounds like an offer to kiss and make up:

No response was forthcoming from Angela.

Sandy gets the old heave-ho…

It seems that Angela went to Sandy with reports that Mel had called her a crack whore, which set Sandy off on a rampage against Mel.

Mel indignantly denies that she called Sandy any such thing, noting that she “checked the history of (her) Skype conversations”…”on both (Angie’s) Skype accounts, and at no point did (she) ever reference Sandy as a CRACK WHORE“.

Well, no one’s perfect. Mel most definitely did call Sandy a crack whore. Point to Angie on this one, we’re afraid.

…and then it’s Angie’s turn

At this point, though, crack whore or no crack whore, Mel has had quite enough of Angie’s backstabbing ways. She gives her the boot:

Angie retaliates in typical Angie style, by trying to accuse Mel of “practising witchcraft” (we suppose that’s one step up from “being in the cult” in the Angie Power-Disney Little List of Truly Terrible Insults). Not too surprisingly, Mel is unimpressed with this turn of conversation:

Again typically, Angela says she’ll provide proof of claim of Mel’s witchy ways “in God’s good timing” when she gets to it. That’s Angie-Speak for don’t hold your breath.

Then Angie fires back with the allegation that Mel has “alters”, by which she means “alter ego” personalities—so she is claiming that Mel has “Dissociative Identity Disorder”. Remember, this is one of the many mental health diagnoses Angie claims as her own. According to Angie, she has attention deficit hyperactivity disorder, borderline personality disorder, dissociative identity disorder, housemaid’s knee, and piles. Judging from her facial expressions during her video extravaganzas, we tend to believe only the latter diagnosis.

In any case, Mel quite sensibly states that neither she nor Biggi believes in “alters”, and notes that Angela uses this alleged diagnosis as an excuse for being a bitch. Can’t argue with her there.

And then, the coup de grâce: “Sadly I have to say, it becomes harder to disagree with the (McKenzies) Devils about you”. Yowzas! Was that a pig we just spotted flying past the window? 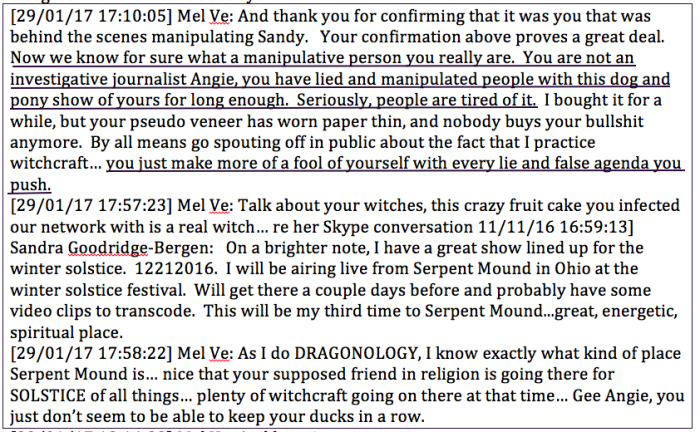 We’re sure Mel is sick to death of our telling her that we told her so about Angie being a lying, manipulative cow, so we won’t. (Whoops, we think we just did. Our bad.) But we think she has definitely received the message now.

More from Angela, who ups the ante: now Mel is not just a witch, but a member of a “blood-drinking South African family”? Uh-huh.

Oh, and the Pope is not a Catholic. We’re sure this will come as a surprise to him.

If this is how Angie “honours (her) promise not to fall out” with Mel, we wonder what she’s like when she’s really in a temper? (Also, if anyone has any idea what she’s talking about when she says Mel is “highlighted by hoaxstead [sic] in pure WITCH mode”, do let us know.)

Mel waits a couple of days before responding to that last volley, but when she does, it’s a doozy: 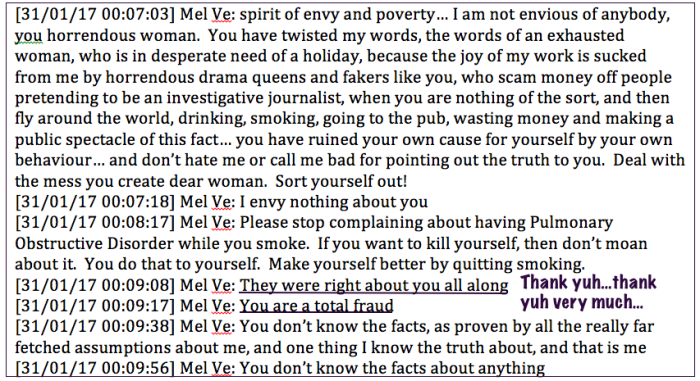 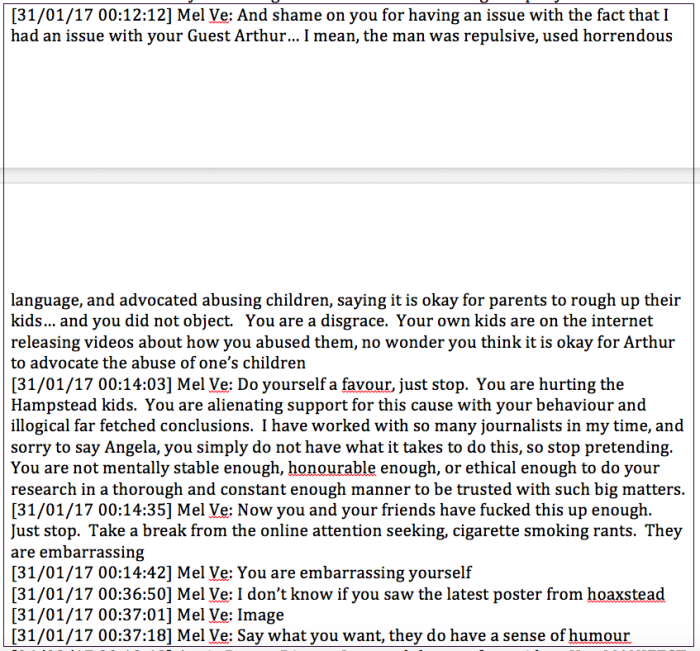 Let us just take this opportunity to point out that we’re well aware of Mel’s continuing stance on Hoaxtead, which is directly counter to our own. However, we really cannot argue with her opinion of Angela—she is a disgraceful, child-abusing embarrassment.

Nearly a week passes before Angie connects with Mel again, to inform her that she “manifests”, whatever that means. Mel seems quite sanguine at this point:

But another week later, the new age platitudes are gone, and Mel is spitting feathers about the video Angie and Sandy made together, in which they skewer Mel:

Angie and Mel, BFFs as recently as the summer, now reduced to random potshots via Skype text. We’re actually just a bit surprised it took them so long. 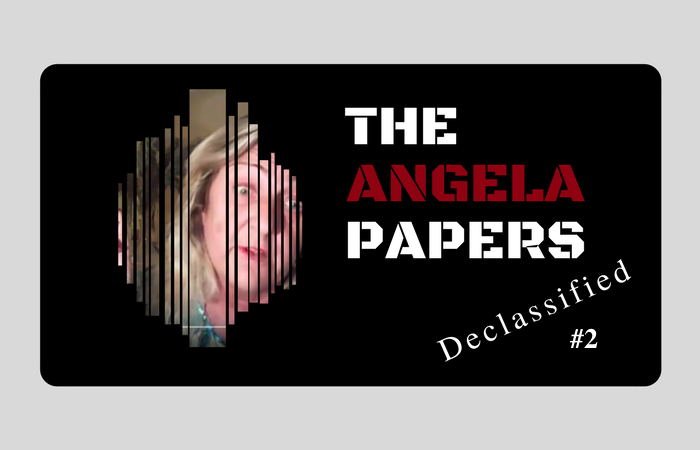