Lately we’ve been taking a very close look at the activities of Sabine McNeill during the lead-up and early days of the Hampstead SRA hoax. However, it’s important not to forget that Sabine had a “partner in crime”—Belinda McKenzie. As most of our readers know, Belinda tends to turn up like a bad penny in all manner of hoaxes and dirty dealings: she collected money for the so-called ‘Starchild’ hoax; she became involved in the Hollie Greig hoax; she helped the notorious fraudster Kevin Annett launch his 2010–2011 tour of the UK; and of course most famously, she headed the dodgy charity Iran Aid, which was later found to be funnelling enormous sums of money to a bank account in Germany, and thence into the pockets of the Mujahidin al Khalq (and, it is rumoured, Belinda herself).

Belinda is the eminence grise of Hoaxtead: always there, always in the background, cheering on her minions and lugging shopping bags full of butties to court when they’re arrested. Some claim that Belinda must have some sort of official “protection”, or even that she’s linked to MI5 or some other agency, as she never seems to face legal consequences for her actions. We are more inclined to think that she’s just a clever manipulator, who knows how to motivate her followers to do her bidding…and help her keep her own well-manicured hands clean.

During the early days of the Hampstead hoax, Belinda was much more visible than she is now: she could be found outside the Royal Courts of Justice most days, protesting the fact-finding hearing as it was under way. She also wrote a number of blog posts, most of which she removed from her blog when it became clear in the summer of 2015 that the police were not planning to turn a blind eye to her machinations.

However, through the magic of the internet we have managed to track down the Missing Belinda Files…and we think they tell an interesting story. First, an excerpt from a post from her blog in mid-February 2015: 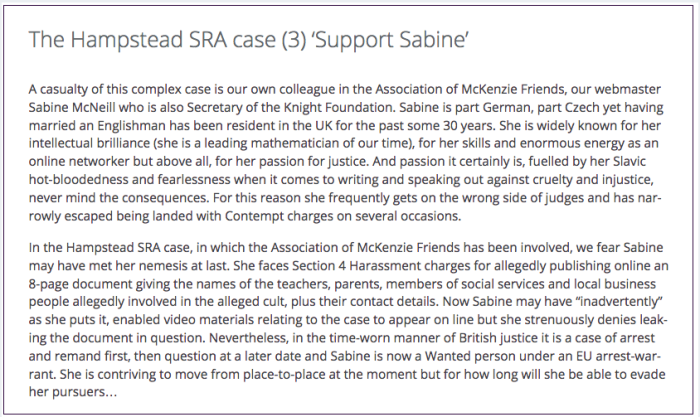 In this post, titled “Support Sabine”, Belinda paints a picture of a brilliant, respected colleague with a Slavic “passion for justice”. While Sabine might have inadvertently “enabled video materials relating to the case to appear on line…she strenuously denies leaking the document in question”. According to Belinda, Sabine was stitched up by the evil British justice system; if she had anything to do with leaking anything related to Hampstead, it was completely by accident.

Compare, though, with this post excerpt, again from Belinda: 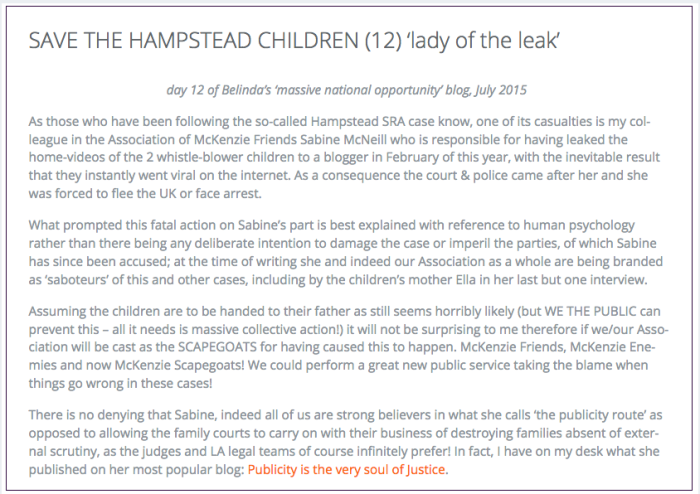 What a difference a few months makes! Now, Belinda talks about “Sabine McNeill who is responsible for having leaked the home-videos of 2 whistle-blower children to a blogger in February of this year, with the inevitable result that they instantly went viral on the internet”.

In this post, Belinda quite nonchalantly tosses her colleague (some would say “her loyal deputy”) under the first passing bus.

Why would she do this? Well, it becomes clearer as one reads further: Belinda notes that “she and our Association as a whole are being branded as ‘saboteurs’ of this and other cases, including by the children’s mother Ella in her last but one interview”.

Belinda desperately wants—needs, in fact—to preserve the reputation of her Association of McKenzie Friends, as it’s her vehicle for latching onto distressed parents who have no representation in Family Court. These cases, although they inevitably go down in flames, serve to publicise Belinda’s political agenda, which in turn fuels her donations button.

It’s quite possible, in fact it’s quite likely that Sabine released the videos of RD’s children under orders from Belinda. However, Belinda is an expert at sniffing the wind, and within a few months she’d realised that unless she disavowed Sabine’s actions, her cunning plans would be toast.

But we find it very interesting that Belinda seems so willing to acknowledge Sabine’s wrong-doing (even though she offers a weak defence—her belief that “Publicity is the very soul of justice”), when it suits her needs. As for Sabine herself, she continues to deny any wrong-doing. Wouldn’t it have been interesting, though, to have been a fly on the wall when Sabine discovered that her “best friend” had shoved her in the path of a double-decker, to save her own skin? 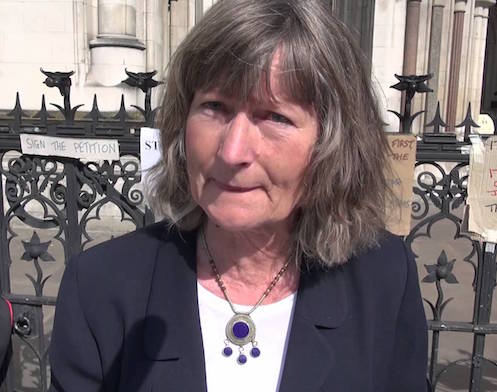 125 thoughts on “Why did Belinda throw Sabine under the bus?”