Yesterday on Hoaxtead Research we revealed evidence indicating that two years ago Sabine McNeill, acting as Ella Draper’s McKenzie friend, made a ham-fisted attempt to blackmail the courts and others. Directing her threats at the “Secret Judiciary, Father, LB Camden, LB Barnet, Cafcass and Met Police, Christchurch Primary and other Schools”, she said:

To avoid high level embarrassment, the following possible arrangements might be worth considering:
1) Instead of starting public law proceedings against the school, the children are returned – with immediate effect – to live with the maternal grandparents in Russia.
2) Instead of mobilising English and Russian social media, the father is given a non-molestation order for life, anywhere in the world.
3) Instead of joining the Russian government to the proceedings, the children are released to their mother and maternal grandparents with immediate effect.

In essence, she demanded that the courts return the children to Ella…or she would use the internet to publicise the hoax far and wide.

We know that Sabine has repeatedly claimed that the courts, the Metropolitan Police Service, and Cafcass are all “in on the cult”; in fact, in their initial allegations to the police, RD’s children named several police officers as “cult members”. These officers turned out not to exist, but the hoax narrative was very clear that “the cult” was everywhere.

This makes Sabine’s blackmail threat all that much more strange. She claims to be a “campaigner for children’s rights”, and yet by her own admission, she would be willing to forget everything she knew about an alleged “death cult” that ostensibly rapes thousands of children, and sacrifices thousands of babies per year…in exchange for granting the mother custody of two children.

So she’d have been perfectly willing to forget about all those other children and babies, and let the alleged “death cult” go about its grisly business as if nothing had happened, if the courts had been willing to accede to her demands?

If Sabine really believed in the carefully constructed Hampstead SRA hoax, how could she have even considered such a deal with the devil (literally)?

The obvious answer is that she didn’t believe a word of the rubbish she was spouting.

Since the beginning, Sabine, Belinda McKenzie, Ella Draper, Abraham Christie, and Charlotte Alton Ward have all known full well that there is no “death cult” in operation in the schools and churches of Hampstead. They created the hoax as a cynical ploy to attract publicity and donations from those gullible enough to fall for their lies.

By the time the case came to the family courts, Sabine and Belinda realised that they had lost control of the narrative: Abe had jumped the gun by taking the children to see his brother-in-law Jean-Clement Yaohirou immediately upon their arrival in London, and as a Special Constable, Jean-Clement had taken his video evidence to the police, which sparked the criminal investigation.

This was not supposed to have happened. The hoax was never designed to stand up to police scrutiny; the plan was to release the videos of the children “confessing” onto the internet, one at a time, in order to build momentum.

Those videos were made in short, bite-sized chunks for a couple of reasons: first, despite the month of torture in Morocco, the little girl was still stubbornly refusing to coöperate and lie about her father and her teachers and school friends. It was difficult to make longer films, as the children, especially the girl, would frequently go “off script”. In one of the videos, we hear her younger brother urging her, “Please, you have to tell the truth!” In other words, “Say what Abraham wants you to say, so he’ll stop hurting us!”

Secondly, the videos were meant to act much as TV adverts do: they were short, fascinating, and left the viewers wanting more.

Had things not been thrown off-track by the police investigation and subsequent attempts to reclaim the children from foster care, Sabine might not have felt the need to attempt to blackmail the courts. And when her attempt failed, she might not have felt compelled to follow through on her threat to release the videos, and then the lists of Hampstead parents, teachers, and clergy.

Once this material had been released, Sabine had only one choice: she had to act as though she believed her own lies. But the way in which she released the videos and other material, and her apparent willingness to forget that potentially thousands of children could be at risk, so long as she “won” by having the children returned to their mother, tell the true story. 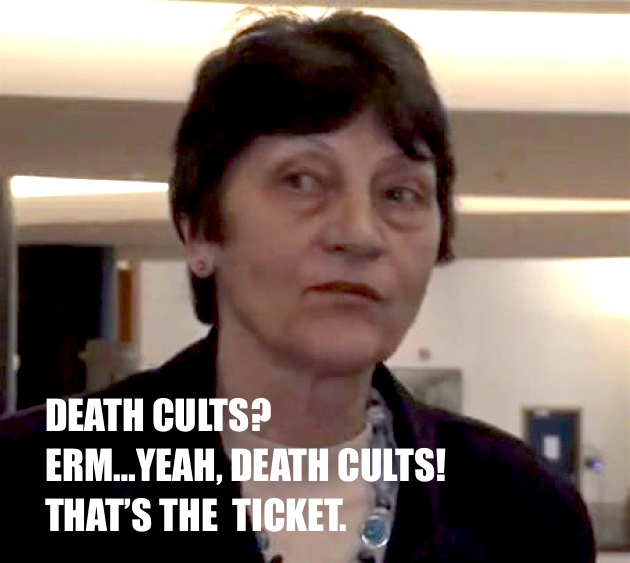