Late last week, a curious little video was released by someone named Catarina Rodrigues. Not a name we know, but we’re certainly familiar with one of the “stars” of her new work: Sabine Kurjo McNeill. The title gives us a hint as to the subject matter: “The Ones Who Fight”.

The video opens on a melodramatic note, as a pre-teen girl is put into a car (clutching a stuffed toy, though she looks a bit old for such things) and driven away. Behind the car, her mother stands in the road, watching, while the voice-over of a child and a mother try to convey the confusion and distress of a child being “snatched” from her family. As a faceless person (social worker?) shows the girl through a doorway, a familiar voice—harsh, high-pitched, with a pronounced German accent—shrieks, “Nothing has changed in the UK! That’s why we are here today. We are here, CRYING for help…there are children SCREAMING to be heard….!”

And suddenly we’re in a European Parliament committee room circa 2014, with Sabine in her brown polyester double-knit suit, chin thrust forward and fists flailing at the desk in front of her. “If you don’t HEAR those children SCREAM…WHO…WILL?” [dramatic pause] [cue intro]

The nearly nine-minute-long video, produced by a young Portuguese woman, claims to be the first “in English on the practice of ‘forced adoptions’ threatening 154 Portuguese families living in the UK”, according to PortugalResident.com, an online news portal. 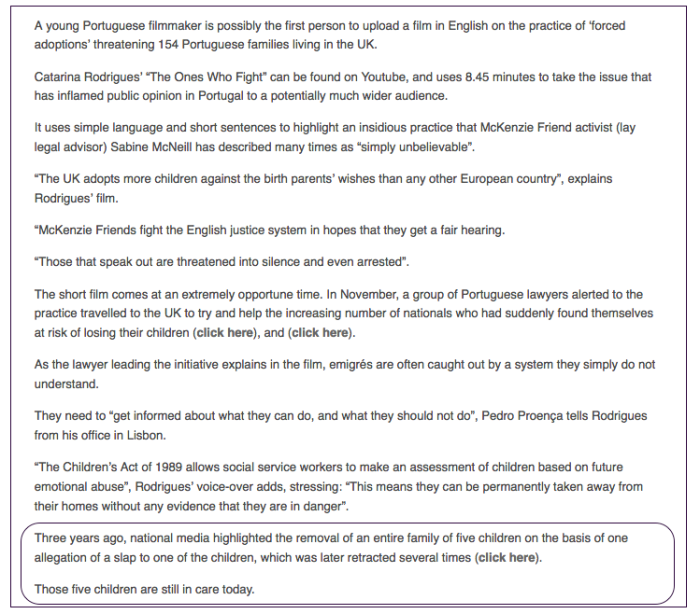 Ah, this begins to clarify the matter. The “five children” are of course the Pedro family, one of Sabine’s “cases” which went distinctly pear-shaped when the parents were arrested for attempting to kidnap their children out of care, where they’d been placed following allegations of abuse.

Sabine, of course, was so delighted to see herself in a starring role that she felt compelled to comment:

Allegations of a UK “adoption scandal” went viral last week after a Portuguese couple whose children were forcibly taken into care last year were accused by police of their attempted abduction.

Carla and José Pedro spent the whole of last Friday in Grantham police station in Lincolnshire after having been taken into custody in the early hours of the morning, along with a Lithuanian couple.

Days before, the two sets of parents had travelled to Brussels with a 30-strong delegation of immigrant parents, petitioning the European Parliament over what they consider to be an insidious scandal involving judges, lawyers and social workers effectively “kidnapping” as many as 4,500 children every year – the majority of them from foreigners.

After the Pedros’ conditional release on Friday evening, Carla Pedro said of the allegations: “It’s all been invented. They (the British authorities) are feeling pressured by the news of us going to the European Parliament to denounce the forced adoptions in Great Britain.

“More than ever, we need the help of our government,” she added over the telephone to Correio da Manhã newspaper.

Further down in the same article, we find an interesting side-note:

This case has been cutting a swathe through national and social media, featuring highly on British-based websites ‘Victims Unite’ and ‘Stolen Children of the UK’.

“You can hardly believe what is happening,” online activist Sabine McNeill told the European Parliament last week. “The cases related during a three-hour audience shocked euro MPs,” affirmed CM. “The denouncements point to the existence of a scheme in the UK involving lawyers, social workers and judges to take children from good parents – the majority immigrants – and put them up for adoption, with the objective of feeding the industry surrounding adoptions.”

Erm….Victims Unite and Stolen Children of the UK? Familiar names. Can’t think where we’ve heard them before.

Oh, and here’s a shocker: on Sabine’s PedroFamily blog (yes, she really does have a blog for almost every occasion), we find evidence of her fingerprints on the alleged attempted kidnapping: 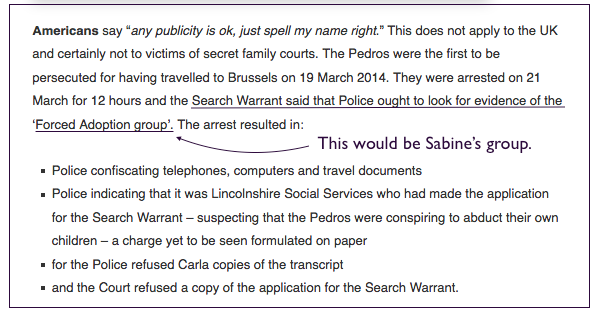 We understand that Sabine was eventually charged in the case, and is still on police bail as a result.

We weren’t surprised, either, to discover that John Hemming, former patron of Belinda McKenzie and Sabine McNeill’s Association of McKenzie Friends, had a finger in the Pedro pie. According to PortugalResident.com,

The only British MP that seems to be supporting cases like this one is Liberal Democrat John Hemming who, as Chairman of Justice for Families, is said to have 2000 similar cases on his hands.

In an interview with BBC’s Panorama programme last year, Hemming said the best option for parents suspected of child abuse in the UK was for them to flee the country

“You can’t get a fair trial here because you cannot rely on the evidence being fair. It’s best simply to go if you can, at the right time, lawfully”, he said.

We’ve discussed here before why that is dangerous, bordering on criminal, advice, so we won’t get into it again. However, we’d urge anyone interested in the issue to have a look at that article.

What does Catarina Rodrigues really know about Sabine?

Back to Ms Rodrigues’ video: we wonder whether she is aware that the heroine of her piece was involved in trying to help a Nigerian couple retain custody of their children, whom they had been convicted of brutally abusing? Or that she was the prime instigator behind the Hampstead SRA hoax, in which two children were subjected to emotional and physical torture in order to extract “confessions” that they had participated in grotesque rituals involving child rape, murder, and cannibalism?

Sabine has a marvelous ability to paint herself as the heroic whistle-blower and champion of the down-trodden; we wonder whether perhaps Ms Rodrigues was seduced by Sabine’s self-aggrandizing rhetoric?

We’d like to think that if this young video producer knew the truth about Sabine and her cronies, she might have thought twice about giving her yet another platform in her video.

Update: On 26 January 2017, we noticed that the video in question had been made “private” by its producer. 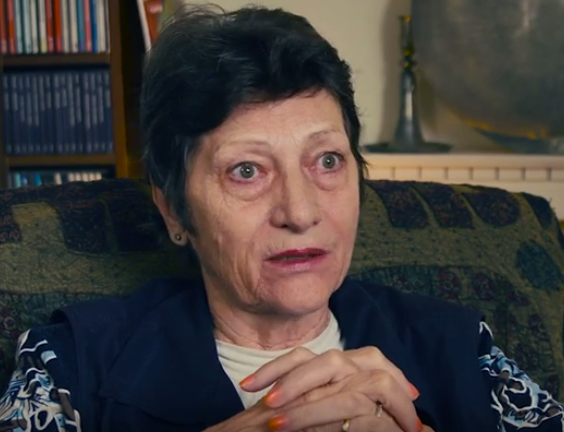