Yesterday we reported that Maurice Kirk, the “flying vet”, had disappeared over Ethiopia during a vintage aeroplane rally that has been making the trek from Crete to Cape Town, South Africa. Thanks to commenter JW for bringing us news that Mr Kirk was found safe and well yesterday. However, as a result of his disappearance, the rest of the rally participants have been detained at Gambela airport by Ethiopian authorities.

We assume that this detention took place as a result of Mr Kirk’s having “gone rogue” in Ethiopian air space, as previous reports stated that he was flying without proper navigational equipment in his plane, and had been asked to withdraw from the rally by organisers.

Most nations don’t take kindly to random air traffic entering their air space, and so the UK Foreign and Commonwealth Office has had to become involved.

This is far from the first time Mr Kirk has ignored or flouted laws regarding flying: in this video, forwarded to us by a reader, Mr Kirk is shown flying from the UK to Australia, despite having only been granted a “permit to test fly”. Rather than using proper navigational charts, he used only his old school atlas to make his highly illegal and dangerous journey.

At about 3:20, Mr Kirk states that he has been swotting up and trying to “maintain a reasonable standard” in preparation for a Civil Aviation Authority test the next day, which will help him “put the right stamp into (his) notebook”. At 06:01, we see Mr Kirk reach for a machine gun which he has propped against the boot of his car. Gripping it, he says, “Anyway…don’t think she’ll be with me tomorrow…hope it won’t be appropriate”.

Yes, one does hope that it would not be necessary or appropriate to tote a working, if elderly, machine gun along to a CAA test.

However, had Mr Kirk done so, it might not have been completely out of character. According to his MAPPA 3 assessment, carried out at the Caswell Clinic in Bridgend in 2009, Mr Kirk had committed “five offences against the person” as well as four public order offences between 1978 and 1999.

Prior to his MAPPA 3 assessment, not only had Mr Kirk attempted to sell a working Lewis machine gun on his website, but his actions up to the point of the assessment indicated that he could pose a substantial risk to the Chief Constable of South Wales and her family, who were all under enhanced protection. He had indicated that he knew her location and could easily find her should he wish to.

In 2012, a restraining order was issued against Mr Kirk, prohibiting him from harassing or causing fear of violence in the director of the Caswell Clinic. Nevertheless, on 25 October 2016, we find this posted to Mr Kirk’s blog: This is accompanied by a photograph of a nude male, who resembles the clinic director. He is sitting on a log at the beach eating his lunch, and the photo looks as though it was taken at a distance.

Was it intended to frighten its subject, who clearly was not aware he was being photographed? That motive seems plausible, given that the photo is followed by this one: 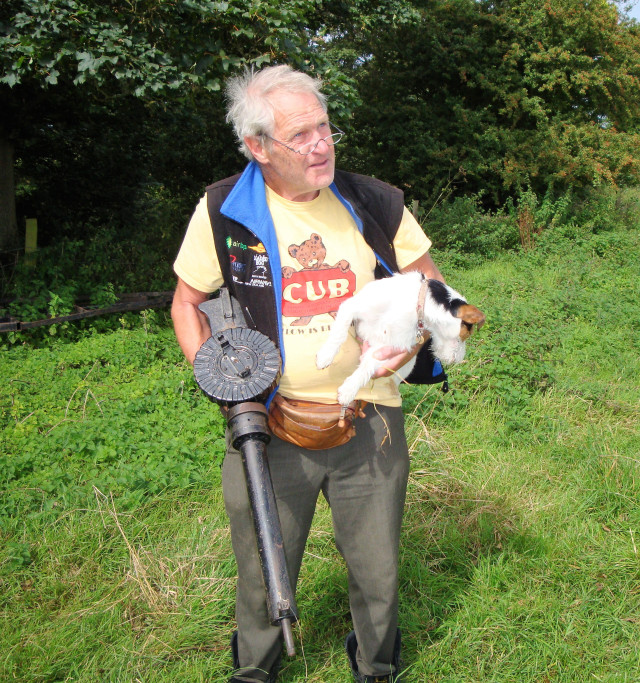 Most recently, even while Mr Kirk was off getting muddled about navigating the Ethiopian skies, he was represented at Cardiff County Court, where he was attempting to bring charges of corruption against the South Wales Police. He had originally engaged Patrick Cullinane as his representative, but since Mr Cullinane’s demise earlier this month, he had settled for the well-known vexatious litigant, Terence Ewing.

Unfortunately, Mr Ewing failed to notify the court that he is, in fact, a vexatious litigant. Whoopsies! Now he’s facing injunctions from the sitting judge, though we have not yet received details regarding the nature of the orders.