Despite Angela Power-Disney’s attempts to convince her followers that she actually showed up at Saturday’s anti-child abuse rally in London, we can now definitely report that there was no trace of her to be found there on that day. In fact, the rally itself seems to have been a complete bust, drawing a grand total of two protesters.

Our Man on the Ground spent the morning and early afternoon at the site, and sent us back this report:

I got there at about 10:30am. It was Saturday and Westminster which means 1,000’s and I mean 1,000’s (in the real sense, not the way Angie says it) of people. It was so busy it was hard to walk in some places. Parliament Square was covered with groups of people so I had a walk round. (They’d have been there for the Refugees Welcome demonstration, which attracted thousands.—Editor)

Thought I saw Rupert, then thought i saw him again and again—then realised there are lots of Americans look like Rupert. Eventually, on the corner I saw the small Scottish woman with the huge…tracts of land, deep in conversation with an older man. (That’d be Mary Rooney and  fellow conspiranoid Sid Hingerty—Ed.)

I walked round a few times but no sign of anyone else. Didn’t know what to think—perhaps they’d arrived late and the demo had gone off elsewhere?

I walked up to Downing Street to check that out but all that was there were groups of Americans and Chinese. So I walked down again and those two were still there so I found a seat on a wall and waited….and waited…..and waited….. 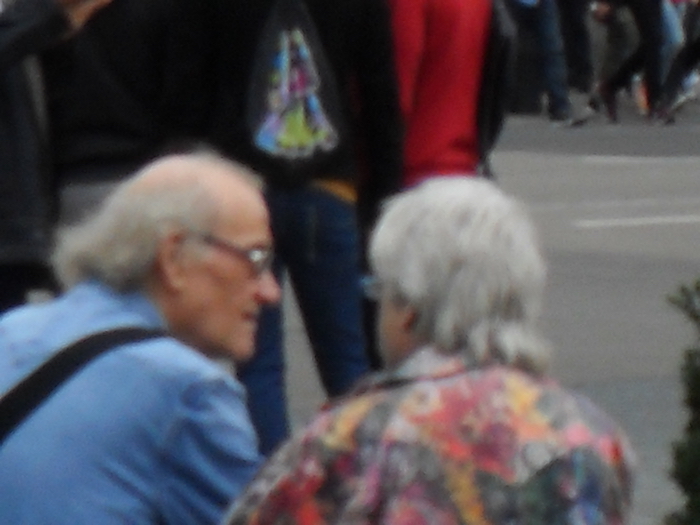 Anyway, about 11:30 am Mary gets a text message and they both stand up and look like they have a purpose.

Then they both RAN (and I mean RAN—like a couple of 15-year-olds—they’re both fit, I’ll give them that) across the road and up Parliament Street towards Downing Street. I’ve honestly never seen two people that old run that well.

I thought they must have found the others so I followed although lost sight of them cos my running days are over. I walked on the other side of the street to Downing Street but again—nothing going on there. So walked back towards Parliament Square and there they were. Sitting outside the Red Lion.

I was feeling pretty thirsty by then, so I slipped around behind them and got myself a pint of shandy.

About 12:30pm decided to have one more go round the Houses of Parliament and Parliament Square to see who was there. By now it was HEAVING with people. But nothing! Nobody!

Went back to the pub, and Mary and Sid had gone.

But no sign of Angie anywhere, all day. No Belinda, no Neelu, no one but Mary and Sid. I reckon if Angie had been there, she would have met up with her friends, especially because they were the only ones there for that protest.

We showed Our Man on the Ground the selfies Angie posted Saturday, and asked whether he might have just missed her?

See this picture of Angie? This photo is taken exactly where I was and where Mary and Sid were sitting:

By 12:30pm the place was HEAVING—you could hardly walk down the pavement. And yet in the picture of Angie and Big Ben it’s 12:20pm, and only a few people there. So—I think—the photos were taken at another time.

We asked Our Man on the Ground about Angie’s shots of the police stationed outside Downing Street. 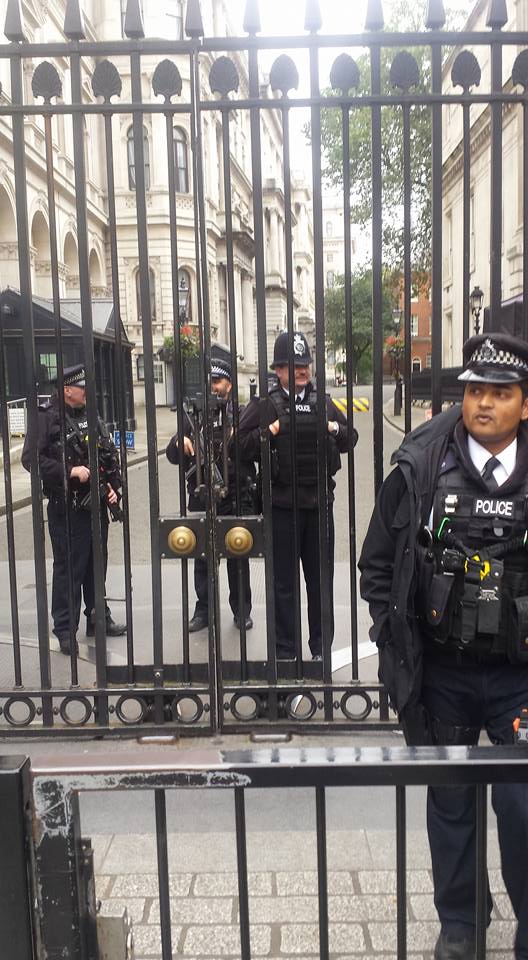 I visited Downing Street three times (it’s only a short walk up the road from Parliament Square). Each time I went there were two policemen in front of the gate and none behind it. Both coppers were middle aged and white.

Not one young, dark-skinned cop, then. Hmm.

So…bottom line: the rally that Angie hyped so loudly, and claimed she’d be attending, consisted of two old conspiraloons who hoofed it off to the nearest pub as soon as Belinda texted to let them know they could abandon their post.

And not a sign of Angie. You don’t think she could have been telling porkies, do you?

82 thoughts on “Angie a no-show at child abuse rally”