In yesterday’s comments section, we received a post from regular commenter JW, whose friend Karen Johnson originally contacted Angela Power-Disney back in March to determine whether her ‘Kenya Project’ would be a worthy cause to which she could donate.

As regular readers will recall, Angie’s responses gave Ms Johnson further cause to doubt her, and so she began digging about and directly contacting Pastor David Chesoli, who runs the Kenyan orphanage and school. The more she compared Mr Chesoli’s side of the story with Angie’s, the clearer it became that something was very wrong.

Significant sums of money seemed to have disappeared.

Ms Johnson reported this discrepancy to the Irish authorities, who have apparently been taking her suspicions seriously, as Angie has admitted to having to consult lawyers and get her books in order…though there’s been no evidence so far that she’s been able to do this.

At one point, Angie was admitting that money was indeed missing, but she pointed the finger of blame at Mr Chesoli rather than admitting that she might have been skimming from the funds she collected.

The upshot of all this is that Mr Chesoli’s orphanage/school has now lost even the small amount of funding that Angie had previously been remitting: 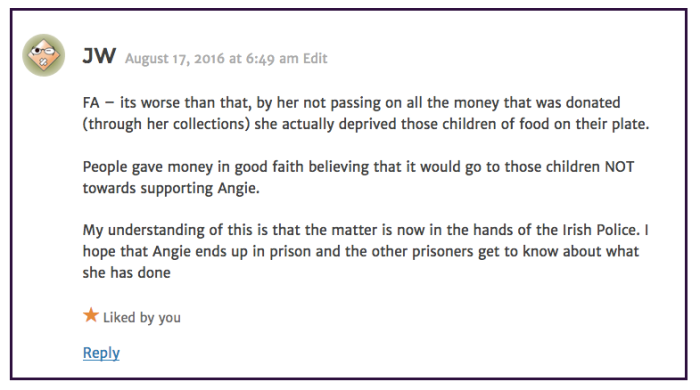 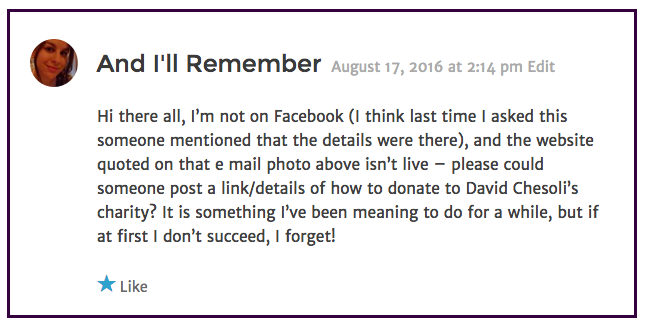 We were appalled to hear that Angie had stopped donating even the small amounts she’d been sending, and so for the first time in this blog’s history, we’re going to ask that our readers consider making a donation…but not to us.

If anyone is able to donate even a small amount, we’d like to see the money go directly to Mr Chesoli’s “Champion Orphanage & Academy”.

We understand that the fastest and most effective way to reach Mr Chesoli is via email, as he has a smartphone but no regular computer access.

His email address is: dchesoli@yahoo.com. Once contacted, he will be able to give instructions as to how to make a bank transfer.

We’ve investigated the charity, and feel that it’s a worthwhile way to make a real difference to the orphans it serves. And we feel very strongly that just because Angela has been shown up as an alleged charity scammer, there’s no reason to deprive innocent children of food, shelter, and education.

We’ll be sending a donation on behalf of the blog within the next couple of days, and hope you’ll consider doing so as well.