A few of us were lounging about Hoaxtead Research HQ the other day (down the pub, the table in back, last one in buys the first round), discussing Angela Fag-Ash Disney’s mercurial rise to fame and glory via Mel Ve’s amazingly successful Conscious Consumer Network.

We were actually wondering how hard up Mel must be for broadcasters, to bring a scamming, scheming has-been like Angie on board. We wondered: what hoops had Angie had to jump through to get her coveted Monday evening show?

One of our team members had the brilliant idea of going straight to the horse’s mouth, so to speak. He sent an email asking Mel to send us the CCN info pack, and after a bit of dithering on Mel’s part, it finally arrived in our email in-box.

Like kids at Christmas, we tore the wrapping off…and we were not disappointed.

Here’s what we found: 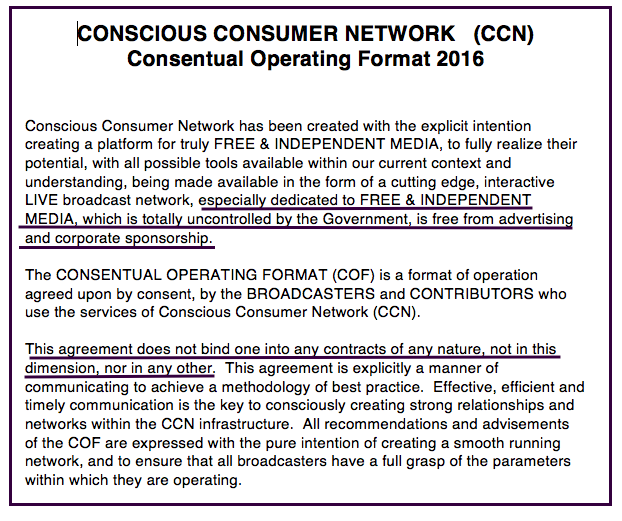 In florid, typo- and spelling error-ridden text, Mel spells it out: in her quest to create a “FREE & INDEPENDENT MEDIA, which is totally uncontrolled by the Government”, she has decreed that CCN will be “free from advertising and corporate sponsorship”.

More on this in a bit.

Incidentally, “[t]his agreement does not bind one into any contracts of any nature, not in this dimension, nor in any other“. Phew. We were worried about those 87th-dimension contractual obligations; we’ve heard they’re killers. And don’t you just hate it when you’re bound in one dimension and not another?

Also, if this contract isn’t binding, in the dimension or dimensions of your choice, what is the point of signing it? Does this mean that once the contract is signed, the broadcaster has no further obligation to CCN?

Or perhaps it’s simply CCN’s way of saying, “Go ahead and sign this, and then see how many of our obligations we fulfill. Hahahahaha!”

You be the judge.

Mel certainly does feel strongly about this FREE & INDEPENDENT MEDIA thing: she repeats it multiple times throughout the “Consentual Operating Format”.

We had a bit of a chuckle at Mel’s insistence that “those using the network, agree to be accountable for the material they produce, by ensuring due diligence is done in preparation for all broadcasts”.

Let’s pause on that thought. Hands up, everyone who thinks Angie even knows what ‘due diligence’ is? If it involves making shit up, throwing about wild and unsubstantiated claims about herself and others, and sharing gossip in the guise of ‘truth’, she’s nailed it though.

“[W]e rely on all broadcasters to act with INTEGRITY, by being RESPONSIBLE and ACCOUNTABLE“…oh, stop! You’re killing us here! We wonder: does Mel actually know what those words mean? Does Angie?

We could spend all day going through this thing, but we’ll spare you and skip rapidly along to item 9: “Content Context”.

We were caught by the idea that not “just any person or subject will be allowed onto the network”. Oh, well then. Good to know that Angie isn’t just anyone. We’re sure she’s tickled pink about this.

In the following bit, Mel spells out what CCN is meant to be about:

Since they don’t tolerate the “incitement of HATERED (sic), FORCE / VIOLENCE, BIGOTRY, RACISM, SEPARATSIM (sic) or the promotion of CULTISM in any shape or form”, we’re sure they’ll be ditching Angie at the first opportunity. After all, if anyone promotes ‘HATERED’, it’s Angie: just check out her venomous diatribes against RD or this blog some time.

We won’t even get into Angie’s role as a “DELIBERATE DISINFORMATIONIST”: she’s knowingly promoting a hoax that’s about as full of disinformation as it’s possible to get.

And we confess we are a bit puzzled about Mel’s position here: after all, in the past few years she’s joined up with practically every troofer scam going: OPPT, the SwissIndo scam, fraud artist Kevin Annett and his fake ITCCS, not to mention the fraudulent ‘SRA survivor’ Toos Nijenhuis…the list goes on.

So “disinformation” hardly seems like a major issue to her.

Just the other day, Mel made the strange allegation that this blog had accused her of helping to have Canadian ‘freeman of the land’ nutter and criminal Dean Clifford sent to prison. Pretty sure we didn’t do that, but if we’d known the opportunity was there, we’d have leapt at it.

Meanwhile, though Mel has reiterated her full support for Clifford:

So…CCN really seems to have no trouble at all with disseminating mis- and disinformation. In fact, it’s a bit of a speciality for them.

Which brings us back to Angie.

If we were feeling cynical, we might be inclined to suspect that Mel had latched onto Angela in a desperate attempt to boost her network’s visibility through Angie’s presumed connection to Rupert and his American audience. How was she to know that Angela’s viewing stats would be so dismally low?

But never mind, because here’s the punchline: on the very last page of the CCN “Consentual Operating Format” document, we find this:

Yep. Angela is coughing up a grand total of €200 per month for the honour of appearing on Mel’s so-called ‘network’. And so is every other broadcaster in Mel Ve’s CCN stable.

We’ll just let you digest that for a moment.

Putting aside the fact that Angela has no known source of income that we’re aware of, we’re very interested in the fact that Mel is pulling in €200 per month per CCN broadcaster…for a platform which our broadcast friends tell us is so far below ‘rudimentary’ as to be barely worthy of contempt. 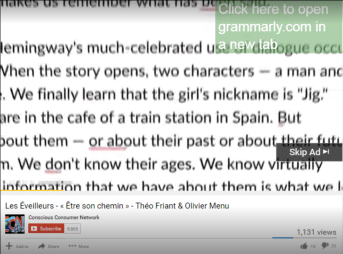 As for Mel’s claim that CCN is “free from advertising and corporate sponsorship”…if that’s the case, we’re wondering why viewers are offered the option to skip paid adverts on CCN’s videos?

We think Mel might be telling porkies here: we’ve seen many, many ads on CCN. 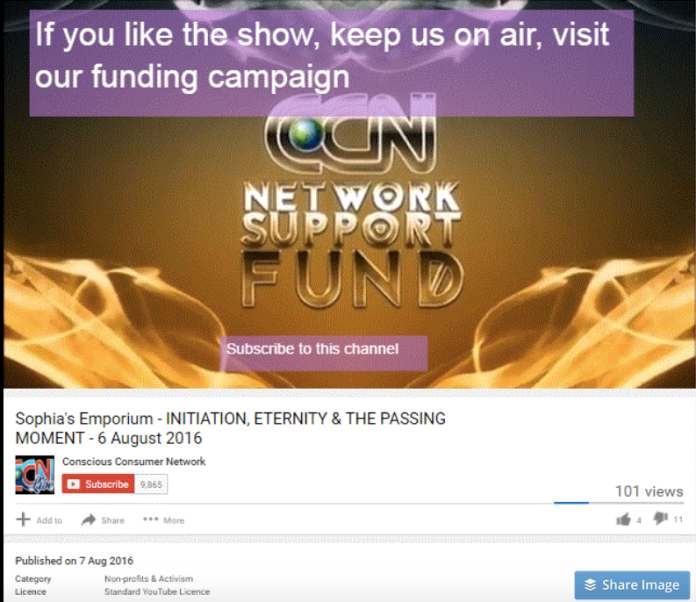 And then there are the incessant requests for funding…as though CCN weren’t already raking in €2,400 per year from each …er, broadcaster who signs their (non-binding in any known or unknown dimension) contract.

What do they receive for this not-insignificant sum? Why, they get to be part of a network! And they get to set Mel’s imprimatur upon their work, which will totally make people respect them more and watch their videos! And…well, that’s all, really.

Angie’s last show, for example, netted at least 11 viewers, 8 of whom were supporters of this blog. But just think what her viewing stats might have been without that all-important CCN stamp of approval!

Another source of cash

While we’re on the topic of CCN’s funding sources, we should mention that McKenzies Devils has pointed out that while she was setting the thing up, Mel received donations from sources that had previously been supporting Kevin Annett, before he and Alfred Lambremont Webre had their little tiff and Annett started tossing his toys out of the pram:

Oh, and did we mention that CCN publishes its videos under the ‘Non-profit Activism’ category on YouTube? We’re sure that’s just Mel’s idea of a little joke.

One last question: we wonder how much of her company’s income Mel reports to the government when tax time rolls around? Not that we suspect she’d ever stoop so low as to become a tax evader. Just a question, that’s all.

In any case, we must thank Mel for sending us her ‘Consentual Operating Format’ document. It kept us entertained for hours, and gave us a great deal to ponder.

p.s. Just yesterday morning, our team member received a followup email from Mel: “HI Xxxxx, I sent through the COF on another thread. Please let me know if you have recieved it. Otherwise I can send it via Skype. My Skype ID is: ccncreativedirector. Add me on Skype and lets have a chat, if you have any further enquiries. Mel xx”

Sorry, Mel. You’ll have to chalk this one up as ‘the one that got away’.