Oh dearie, dearie me, we appear to have upset Mel Ve.

Mel Ve Spencer, that is, owner of the massively popular and always completely trustworthy Conscious Consumer Network. That’s the YouTube conspiritainment channel which for some reason offered Angela Fag-Ash Disney a 2-hour slot each Monday evening.

Yesterday we noted that Angela had gone on an extra-specially catty, vindictive, and ultimately self-justifying rant about Max Spier, who died last week. We included a video put together by our perceptive colleagues at McKenzie Friends, and apparently this came to the attention of the lobster-toned Mel Ve, causing her face to turn from crimson to vermilion, such was her rage. 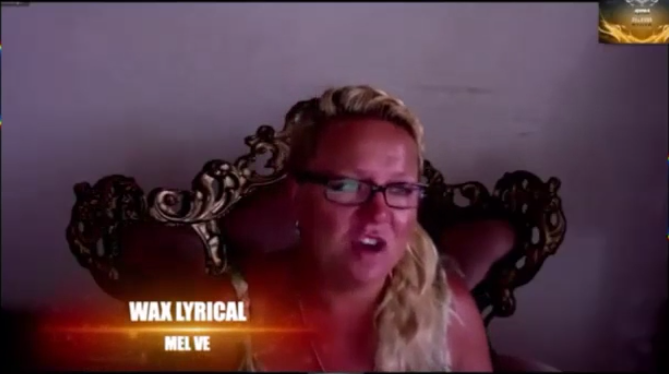 Mel Ve on her Throne of Good Taste

We must thank our friend Spiny Norman for sitting through Mel’s ranting video and gathering up the salient notes for us:

25:13 – “This is something that’s been uploaded by Mckenzie’s Devils…It’s having a go at Angela Power-Disney, who is one of the people who was very big in exposing the information with regards to the Hampstead case…Of course, many people have called this a hoax and I’ll get on to talk about that in a moment…Angela Power-Disney, who has recently joined our network, is being trolled like crazy by all sorts of interesting and weird people and somehow we’ve all been sorta lumped together…”

Oh but then, to Mel’s credit, it gets really interesting…

“I’d like to just clarify first off a couple of things about what the McKenzie’s Devils really are. So for anybody who does want to go and watch this really pathetic attack on us, this is the video…I have quite a bit of experience with what’s going on here…Who is Belinda McKenzie? That’s a very interesting question and she’s got a lot to account for as far as I’m concerned. I have a history with Belinda McKenzie which goes all the way back to 2009…”

She then goes on to talk about Belinda’s ‘Star Child skull’ scam (even implying that Belinda had her gassed in her sleep at a conference and stole her filming equipment); and she then, surprisingly, sets out to debunk the Hollie Greig case and Robert Green…and expresses regret over her involvement in the case at the time and what she put the accused through!

Sadly, she then blows it by descending back into hoaxer mode, sticking stubbornly to her guns on the Hampstead scam and once again banging on about how she “could feel the darkness” when she lived in Finchley Road (and trotting out all the usual discredited arguments and rabidly defending Abe & Ella).

And then she’s back into full-on conspiraloon mode and provides us with some comedy gold:…

“…Which is why we stand by Angela Power-Disney. And I feel very sorry for those people who feel the need to go and make these scathing videos about us, calling themselves McKenzie’s Devils.

There’s another little group of women known as ‘McKenzie’s Witches’, a harem of women she lets stay at her home – and there’s all sorts of stories that go round about what goes on in that house…

Coz let me tell you Highgate is one of the most questionable areas in the whole of London. There are some frickin’ scary things that go on there. Even when I lived there, I was acutely aware of it…

And if you go and look at, like, the most haunted places in Britain, Highgate Cemetery turns up on the top 10 list. I mean, Karl Marx, satanist and paedophile, is buried there…It’s not a coincidence that Abraham Stoker wrote the story of Dracula and set it in Highgate Cemetery, right. There’s a reason for that. And if you understand what vampires are, and kinda where they come from, you start getting into all of the reptilian and dragon information…

I’ve looked at the Hampstead Hoax [sic] website and most of the facts that they’ve got on there about me and my fellow alternative media journalists are blatantly incorrect, in fact outright lies, exacerbations, misperceptions and all twisted around to make us seem like we’re the hoaxters…”

She then throws another hissy fit about this blog and about McKenzie’s Devils and about how she knows it’s not a hoax because children never lie (yawn). Frankly, she’s just repeating herself over and over by this point (and I can’t be arsed to transcribe it), followed by her getting amusingly tearful and starting to hyperventilate.

So “most of the facts [we’ve] got” on this site about Mel and her “fellow alternative media journalists” are blatantly incorrect. Says the woman who claims to be a journalist but cannot be arsed to get the name of the blog right.

Rule One in J-School: Get the names right. It’s kind of basic.

Mel does seem to have a teeny-tiny little credibility problem, though. In the video below, McKenzies Devils points out that before Hoaxtead was even a glint in Belinda’s and Abe’s eye, Mel was out shilling for Kevin Annett and his fake ‘ITCCS’ court, which was supposed to “investigate colonial genocide in South Africa” back in 2013.

I look forward to the day when I don’t have to have yet another case file cross my desk of yet more people who’ve been brutally murdered in my home country for no other crime than having white skin.

Fortunately for her, she’ll be spared any concern, unless there’s a sudden shift toward brutally murdering people who resemble demented lobsters sitting on baroque thrones making faux news videos.

Well, never mind. We’re very interested, though, in Mel’s assertions that if only we could provide some actual real evidence that Hoaxtead is in fact a fantasy concocted by Abe Christie and Ella Draper, she would be “more than willing to listen”!

Erm…where do we even begin?

Might we recommend that Mel start with the IPCC report, which we reported on in some depth last month? Mel’s the one who alleges she’s a journalist; we’re sure she’ll be up for some good old-fashioned research, even if all that means is reading a few blog articles that demonstrate very clearly that Hoaxtead is, well, a hoax.

Given the stellar journalistic standards we’ve seen from her so far, though, we’re not holding our breath.