On Friday, 3rd June, The Transparency Project sponsored the 2016 Child Protection Conference—a followup to last year’s multi-discliplinary event “which discussed the different views and perspectives from experts, lawyers, social workers, parents and care leavers in an attempt to re-position the current unhealthily polarised debate around the child protection system”.

This year’s event picked up where last year’s left off. According to the media release,

In reaction to overwhelming feedback concluding that there are entrenched failings within the child protection system, this year’s conference will hear from social work practitioners, parents with experience of care proceedings, family lawyers, academics and journalists who will address and explore:

CPConf2016 was another great success—we weren’t able to attend, but we watched the hashtag, #CPConf2016, as it ‘trended’ on Twitter, and we read the tweets from participants, who described a vibrant, fascinating, and useful dialogue.

However, it seems that a few people were determined to undermine the conference’s goals of creating better, more transparent support for families and children. One of the organisers, Sarah Phillimore, alerted us to an unusual discovery:

Satanists running the planet? Say it ain’t so! Whoever left these leaflets behind (and it turns out that more than one was left) seems to have a few familiar preoccupations:

Oh dear…who could it be?

It was later revealed that our old friend Neelu Berry was the Bog Papers culprit. She was seen distributing the leaflets onsite during the conference, and it seemed that she was there as part of a loosely organised ‘gang’ of people affiliated with Maggie Tuttle, who’d come to preach their own brand of ‘child protection’ to conference-goers.

Meanwhile, back in the blogosphere…

We’re certain that it’s only by the purest co-inky-dink that Sabine’s latest blog post covered much of the same territory as the Bog Papers:

Her latest paranoid perambulation comes to us courtesy of Henry Makow, described on RationalWiki as

…what you get when you cross a men’s rights activist with a paranoid conspiracy theorist. Makow believes the world is controlled by nefarious Judeo–Masonic/Satanic/Commie forces, spearheaded by the Rockefeller Foundation. He also believes that the aforementioned concocted feminism, so that women wouldn’t have children, as part of depopulation efforts.

So, totally rational and sane, then. Good to know.

And fascinating that Sabine’s blog post should be so closely echoed by the Bog Papers. Just saying.

Bring on the saboteurs

Admittedly, a few ridiculous leaflets left in the toilets at a conference are hardly earth-shattering news.

But it seems that a few conference attendees were less interested in joining the effort to find practical, humane solutions to a broken child protection system, and much more interested in creating as much havoc and disruption as possible.

For instance, one speaker at the conference was ‘Annie’, a courageous woman who shared her story of fighting to get her children back when they were removed from her care. Participants were warned that they must not take photos of Annie, as this would breach a Reporting Restrictions Order, placing them in contempt of court.

Another of the ‘gang’, a woman named Daniela Gulloti, ignored all warnings, and yesterday published a series of photos in which Annie was clearly visible, and easily identified.

When confronted and asked to remove them, Daniela stated that ‘others’ were also taking pictures during Annie’s presentation. Keep in mind: these illegal photographers are at least nominally on the same side as Annie.

Annie reacted much more reasonably than the culprits deserved: 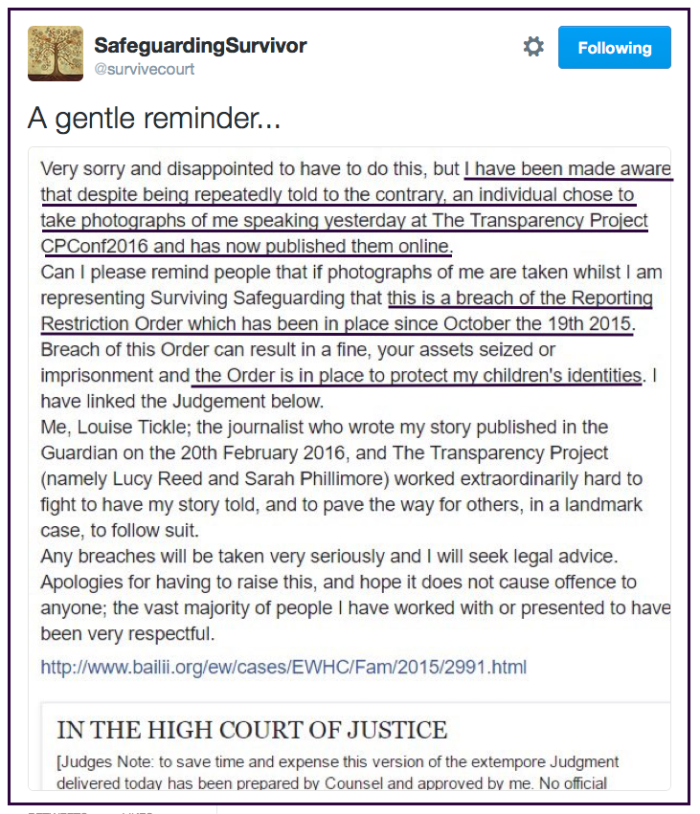 Quite understandably, Annie is very upset about this breach of her children’s privacy. We hope this episode won’t stop her from sharing her story, and her insights, at future conferences.

The Tuttle gang’s actions leave us wondering: what could possibly motivate people—some of whom consider themselves victims of the child protection system—to interfere with and disrupt a conference designed to help parents find a voice in a system that has lost track of them?

Is it possible that these people really see no contradiction between their efforts to subvert the process, and feeling that the conference was valuable and worthwhile? Did Daniela, who took the illegal photos of Annie, think that she was doing something positive to help parents, in line with the aims of the conference, by publicly identifying Annie and her children?

Ultimately, while these people may believe that they are contributing to some sort of solution, their actions say that they’re much less interested in finding practical, viable strategies, and much more keen on spreading their own dogma, no matter how far-fetched and ludicrous. 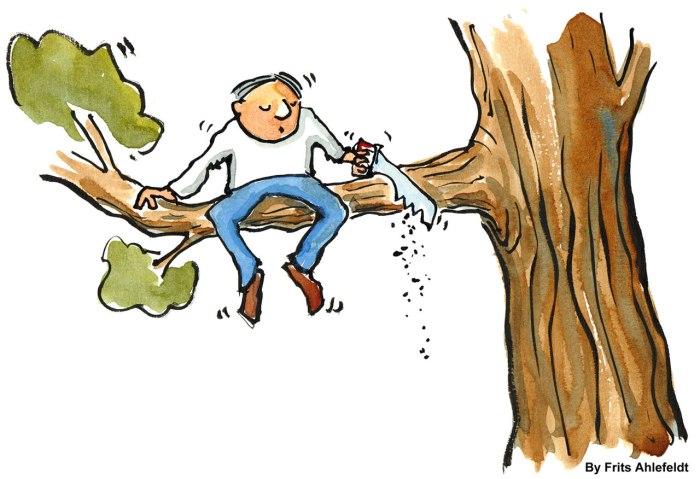