A couple of days ago we were amused to note that ‘Anonymous #OpHampstead’ had posted an article from the dreaded BBC, with the comment, “People like James Hind would rather you not read this…doh!” (James Hind, as many of you know, is the Facebook name of regular HR commenter Satanic Views).

We had to laugh at the article identified, though: 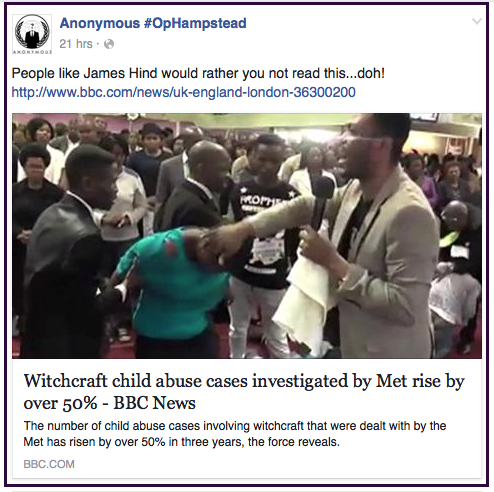 In fact, alert readers might recall that this same article was discussed in our comments section a couple of days ago: 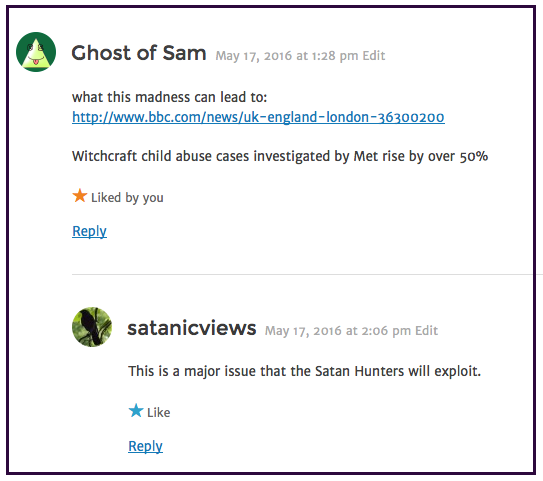 What is ‘witchcraft child abuse’?

The term ‘witchcraft child abuse’ doesn’t refer to deranged stories of children being abused by shadowy cults who eat babies and wear their skins on their feet while dancing with the skulls.

Rather, it’s a serious problem, stemming from a literal belief in witchcraft and spirit possession amongst certain faith communities. Children who are targetted as being ‘possessed by evil spirits’ have been beaten, had pepper rubbed in their eyes, been swung around by the feet to have the spirits driven out of them; some have been raped, threatened with death, or even killed and dismembered.

In a 2014 article in The Guardian, police noted a sharp increase in cases of religious or ritualistic abuse of children since 2004, when only 2 cases were reported; by contrast, in 2014, 30 cases had been reported.

The increase, said [DS Terry] Sharpe, who leads Project Violet, the Met’s response to concerns of faith-based ritual abuse, was the result of “mass migration and globalisation”. He added: “People bring their cultures and beliefs with them.”

Two of 27 such cases that were referred to the Metropolitan police involved children who claimed they were raped in attacks linked to witchcraft. One allegation involved a church pastor who was alleged to have swung a child around banging the youngster’s head to “drive out the devil”.

In recent years, the referrals have come mainly from the African Christian churches, he said, but they could involve other cultures and faith communities. “This morning we had a referral from the Muslim community” said Sharpe. “It is important that professionals are clear about the signs to look out for.”

In one case, a 15-year-old from Paris who was visiting relatives in London 2010, was murdered in horrific circumstances, after his sister and her boyfriend became convinced he was possessed by kindoki or evil spirits. Kristy Bamu’s case had echoes of the horrific torture and murder of eight-year-old Victoria Climbié by her guardians in 2001, when they believed she was possessed by spirits, a case which led to big changes in child protection.

In 2015, according to the BBC article, 50 cases of child abuse cases involving witchcraft were reported.

An early high-profile case was that of Bishop Gloria Musa and her husband Joseph, who had their 6 children removed from their care, and ultimately were jailed in 2012.

According to their eldest daughter, who dropped a letter out of her bedroom window in a last-ditch cry for help, “My mum is the worst mum ever because she can’t cope with five of us, her broken hand and being pregnant. She always leaves me out so I always starve and I am forced to work. If I don’t get enough house work done, I am beaten without mercy with the wooden end of a broom. I have scars all over me to prove it. I can’t stay here. I would like a new mum”. She also stated that her father had dangled her by her feet down the stairwell of the house, tied her hands behind her back and her legs together “to get the devilish spirits out”. She and her siblings showed investigators stick-shaped bruises on their bodies, and spoke of being left alone for hours, sometimes days, without food.

It might surprise some to realise that Gloria and Joseph Musa were championed by those crusading ‘children’s rights activists’, Belinda McKenzie and Sabine McNeill. According to Sabine and Belinda, the Musas were deprived of their children for no discernible reason other than the malice of Haringey Council, and deserved to have them back forthwith.

Characteristically, in her blog dedicated to Gloria Musa, Sabine threw around allegations of child-snatching, jury-rigging, and human rights violations; but neither she nor Belinda showed any concern for the plight of the children, abused by parents who were convinced they were possessed by evil spirits.

So when ‘Anon OpHampstead’ tries to claim that “people like [us] would rather you not read” about witchcraft child abuse, we can’t help but laugh. If he or any of his Hoaxtead-pushing friends were honest with themselves, they’d see who is really afraid to address this issue. 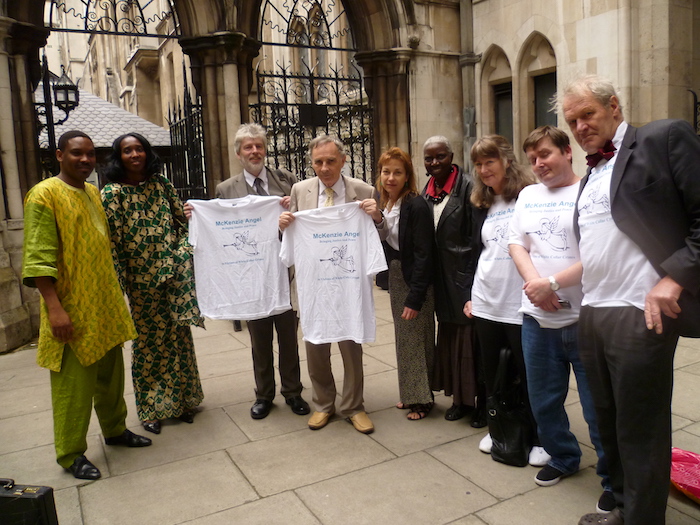