Following up on yesterday’s post about Belinda’s early (one might almost say ‘preliminary’) involvement in the Hampstead SRA hoax, one of our readers kindly forwarded us some very interesting information which dates back to 2004.

It seems an American former novelist and scriptwriter named Lloyd Pye was already hard at work publicising a misshapen 900-year-old skull that had somehow come into his possession in the late 1990s. 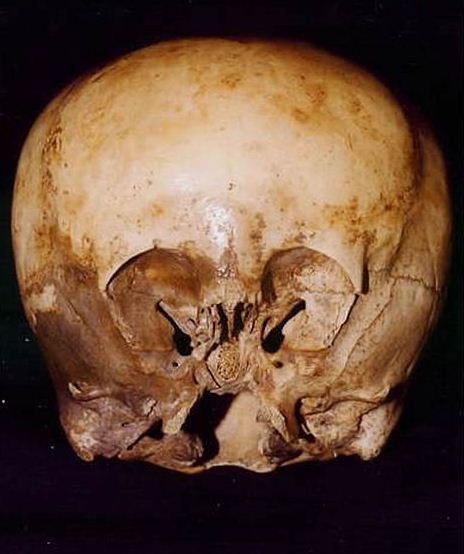 As Frank Johnson points out in his excellent blog post, “A Bone to Pick with the Starchild Skull“,

At first glance, the enlarged skull does look similar to what one would expect an alien, or at least some sort of alien hybrid (or maybe nephilim) skull to look like. It would be a an excellent piece of evidence should it prove to be authentic. Especially for those who think aliens have visited, or that there is a modern alien breeding plan to create hybrids/nephilim.

“Should it prove to be authentic”: aye, there’s the rub.

In fact, though Pye and his many adoring fans tried their best to flog the thing as evidence of human-alien interbreeding, the skull turned out to be boringly human. But that didn’t stop Pye. Despite DNA tests showing that the skull was that of a male with hydrocephalus, Pye kept flogging what he named the ‘Starchild’ skull. Here’s one of his early fundraising pleas:

First, I want to wish all Americans, Happy Thanksgiving! To the rest of you, we all have something to be thankful for this year. As you know if you’ve been to the new website (www.starchild-uk.com) to see the slide show there, we have discovered two unknown, previously unimagined aspects of the Starchild’s bone: (1) what seems to be highly durable fibers threaded throughout; and (2) what seems to be desiccated marrow, or some other reddish residue, in the cancellous holes that contained marrow when it was alive. These are both certain to be historic finds, regardless of whether they do or don’t mean the Starchild is at least partially of alien origin.

Thus, after six long years of frustrating struggle, we stand on the verge of making world-class history at some point during the next few months. Unfortunately, the closer we’ve drawn to scientifically proving our supposition about possible alien involvement, the less we are being helped to achieve that monumental goal. This is a baffling contradiction, one I simply don’t understand. I work for all of you, in the stead of everyone whom I assume would do what I do if you had the opportunity. I would expect you all to help even more as we drew closer to the final goal. Yet exactly the opposite has taken place. The closer we get, the more help has dried up, to the point where we are near blowing away. I’m being painfully serious when I say that.

It’s all about numbers, which is why I opened with how many of you are on the Starchild mailing list–1500. A few months ago, when I last sent out a plea for help, we received $1500 in contributions. You can all see the average. One person gave $1000, four others gave the other $500. 5 out of 1500. You can see that average, too. But the bottom line, the most crucial number, is this: we are perilously near to 0 (zero) in the Starchild bank account, and if we don’t get a serious infusion of help by the end of the year, we will be forced to close up shop for an indeterminate time, if not permanently. For sure the momentum and goodwill we’ve established with some of the research community in England will be lost. This would be a tragedy I hope all 1500 of you will consider helping us to avoid.

Naturally, not ALL of you are going to contribute even a dollar, much less $30. Let’s face it, when only 5 out of 1500 respond to a well-justified plea for help, we obviously have a motivation problem. That is just as obviously my fault. I simply have never quite figured out how to motivate each of you to contribute to the cause. But now it’s down to do-or-die for all of us. Many of you have been in this from the start, and many of you have contributed along the way, many of you for substantially more than $30. If not, I wouldn’t be here writing you from London; I would not have made it this far.

Assuming not everyone will contribute $30, that some of you will have to take up slack from others who, for whatever reason, simply cannot send even a minimal amount, if you can, PLEASE send more, whether $50 or $75 or even $100 (or more if you can). I don’t know how else to say it. I don’t know how to grovel any more abjectly than this. I have put six long, grinding, often humiliating years into this work, into getting this thing scientifically evaluated, and now I have it on the verge of success. I can’t imagine what it will be like to have to pull back and accept a defeat of this magnitude, all for lack of an ability to motivate the 1500 of you on my mailing list.

I can do no more. It’s up to you, each and every one of you, and those you might forward this to. You all have to decide if you want this to end knowing you DIDN’T help at the modest level I’m asking all of you to contribute. You will notice, I hope, that I’ve never asked you all to contribute a small amount before. I’ve always felt that would be more like begging than asking for your heartfelt contributions. But desperate times call for desperate measures. This is as desperate as times are going to get for the Starchild. I don’t know how else to make you understand this.

If you are willing to help, PLEASE send checks or bank drafts to Belinda McKenzie, NOT ME, at the address below. (The PayPal account on the website is usable as well.) Belinda is the paymaster now, handling all the money from her Cognoscence account. I’m just an employee and glad to be that to avoid the taint of managing the money. See the list below for where your money will be spent, and why, and know that not a penny will be wasted or spent frivolously. All of us involved in this are seekers of truth, that and nothing more. If you feel the same, now is the time to put at least a little money toward justifying those feelings. Send what you can to:

That’s right. All monies to be sent to Belinda, via something called Cognoscence.

What’s that, you ask? This:

Unsurprisingly, ‘the windfall that generated our momentum is now depleted’. Well fancy that! Couldn’t have seen that coming at all.

It’s the old plea: we need money to help us carry on with the critically important work of proving that a misshapen skull is actually proof that aliens mated with humans, because…because pseudoscience! Obviously.

Four months later, Pye announced that their funding target had been met, courtesy of a couple of gullible…that is, generous people in Liverpool.

Phew. The suspense was killing us.

Belinda seems to have stuck with the Starchild project for the better part of a decade. In March 2013 we find her picture on their website (now cached):

In 2012, in fact, Belinda was in charge of Lloyd Pye’s UK tour, which featured a lecture with Mr Starchild himself, at her home:

We’ve heard first-hand reports from another of Pye’s UK lectures that year, indicating that he’d achieved something akin to star status: women were lining up to have their photos taken with him, and his books (of course there were books!) were practically flying off the tables, where willing volunteers took the cash while Pye stood around having his picture taken.

Ultimately, this cash cow came to a sad end, as Pye was diagnosed with cancer, and died in December 2013.

Arguably, the Starchild skull episode was nowhere near Hoaxtead in terms of either scope or damage done: in the end, who really cares if gullible people are willing to be parted from their money to prove that aliens once walked…and more…among us?

But it’s only one of the many pies into which Belinda seems to have stuck her thumb, and it looks as though it was a rich one.