It was brought to our attention yesterday that Bronny ‘Dumpty’ Llewellyn seems to have been having some sort of breakdown over the past day or two.

No, we mean even more so than usual.

But we think we might have uncovered the source of it. Yesterday evening we received a plain brown envelope from one of our readers, containing the following note:

What could this mean? We set off to find out for ourselves. First stop: Bronny’s Facebook page.

A word of warning: much of what Bronwyn says in these posts references her violent, vile abuse fantasies.
If you’ve suffered sexual abuse, please proceed with caution.

First up: one of Bronny’s deranged rants about RD, who she is convinced is stalking her (contains graphic sexual violence):

Then Bronny issues a warning about Danielle LaVerité, who apparently has been engaging in aggressive blocking/unblocking behaviour. The horror, the horror! Why must everyone pick on poor Bronny? 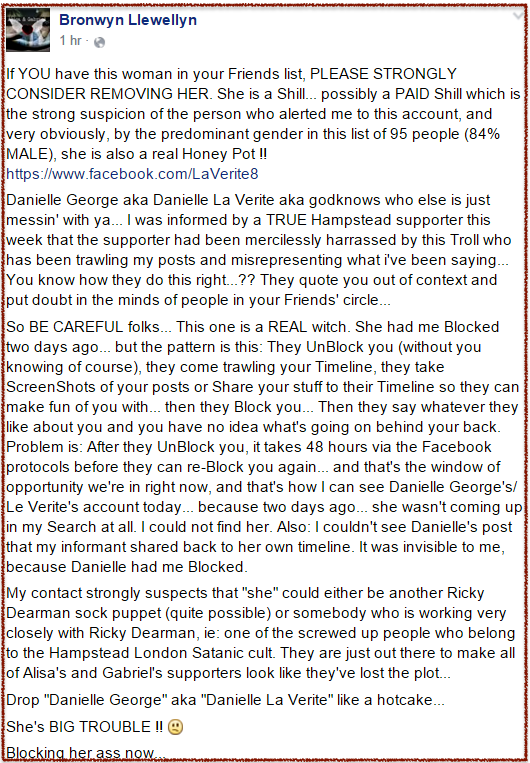 This is where our anonymous correspondent (above) comes in. They considerately inform Dani LaV of Bronny’s hate-fest.

Which sends Bronny spiralling off into a complete loss of emotional self-control: 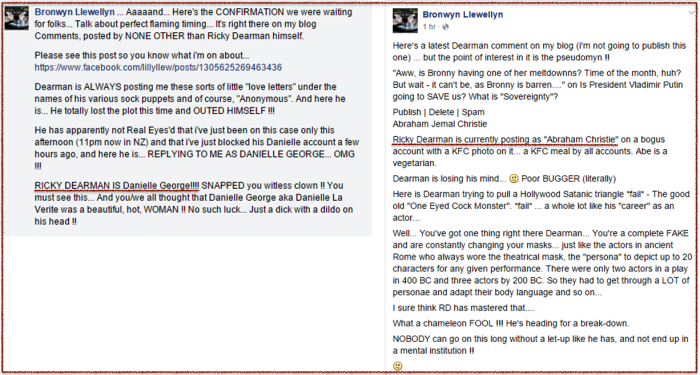 By this point we’ve really lost the thread, if indeed we ever had it: Bronny now seems to think that RD is both Danielle George and Abraham Christie, and that he might or might not be from ancient Rome. She’s also convinced that he’s the one with the mental health problems.

Deciding that discretion was the better part of valour, we closed Bronny’s page and backed slowly away from the computer.

105 thoughts on “Clear the decks, Bronny’s having a major meltdown…”