A few weeks back, we discussed the strong probability that two Driflouds exist. Or at least, that two people seem to be sharing the Drifloud name.

The first is Alan “Mad-Eyes” Wrightson, who dwells in a shepherd’s hut in Portugal, from whence he spent last summer sending out mass emailings of libellous, defamatory, and harassing material to pretty much everyone he could think of, and then some.

Drifloud Mach II, we posit, is none other than Abraham Jemal Christie, who seems to have appropriated the name for his Twitter account, which he’s been using to illegally publish confidential court and police documents, along with his own special brand of pornographic accusations against the innocent parents, teachers, and clergy of Hampstead.

Yesterday, Drifloud II refuted this, claiming that we ‘have no idea who Drifloud is’ (because it’s not at all wankerish to refer to one’s self in the third person): 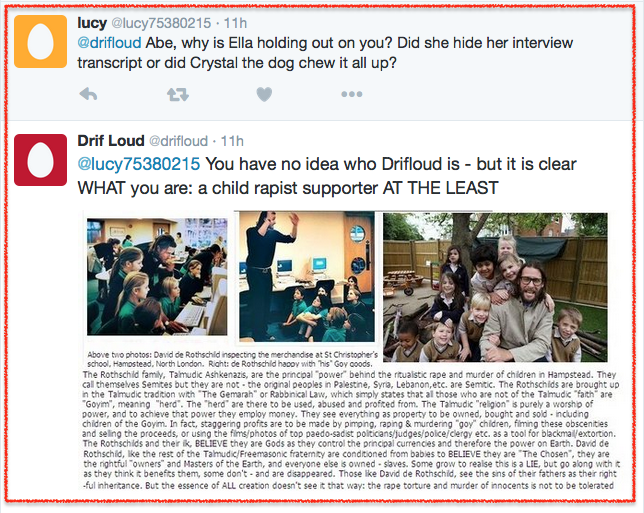 Abe/Drifloud seems to have access to an astonishing amount of confidential court and police material—documents which should by rights belong solely to Ella.

For instance, he’s been releasing cherry-picked segments of the CRIS report, with annotations by ‘Arthur Kirkland’ which he claims ‘prove’ that the hoax is in fact a cover-up:

(What it does prove is that Arthur is altogether too fond of yellow highlighter. But we digress.)

Drifloud’s access to Ella’s legal and police documents seems pretty much unlimited. However, when a Twitter follower asks him to produce the interview which Ella gave to the police…Drifloud stalls out. He claims here that ‘nowhere in the CRIS report is there an interview statement from the mother!!! WHY IS THAT?’

And yet, he seems to have lost track that he tweeted about that very self-same interview with Ella…earlier in the same day! 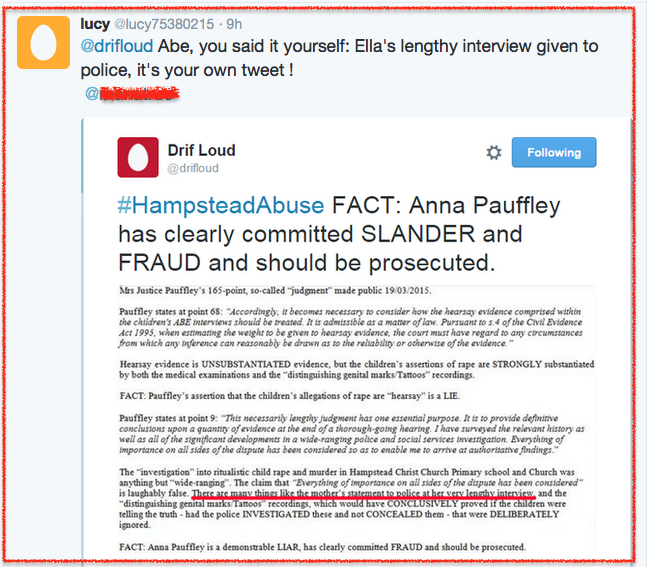 Oh, and if you look on p. 34 of the CRIS report, the interview with Ella is in fact mentioned:

Whoops, Abe…maybe all that hemp is affecting your short-term memory?

What if we’re wrong, and the Twitter version of Drifloud isn’t actually Abe? Well, if that’s the case, then Ella has a much larger problem: it’ll mean she’s committed contempt of court by releasing confidential police and court documents to some wanker on the internet…and this time, she won’t be able to point her finger at Sabine.

So what’s it going to be, Abrella?