One of our readers drew our attention to this Very Angry Post on Angela Fag-Ash Disney’s Facebook page today.

According to her, someone from Hoaxtead Research has sent letters to various people, slamming her for…we’re not really sure what, but apparently she’s Very Very Upset. 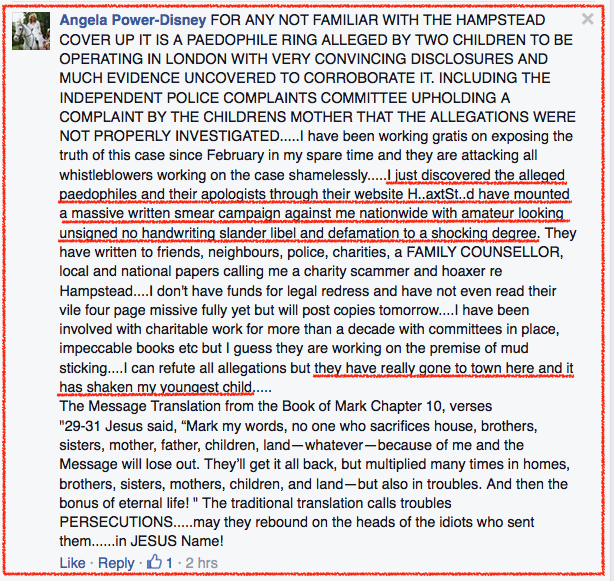 First, we’d like to emphasize up-front that we had nothing to do with any such letters, if indeed they do exist. (Pardon us for sounding doubtful, but Angie has a rather troubled relationship with the truth, so it’s hard for us to judge the veracity of her claim.)

Now, to be fair, we’d likely be pretty upset if people were to start sending out nasty letters smearing and defaming and harassing innocent people, telling their friends, neighbours, and employers that they were evil people…upsetting their children, and…oh.

Wait. Hang on just a moment.

That’s been done, hasn’t it?

Wasn’t Angie acting as right-hand witch-finder to Charlotte Ward Alton during her foul poison-pen heyday at Hamster Research? In fact, we seem to remember that she was quite proud of this association. Practically had business cards printed up.

And oh, look what we found, from back in September!

Yep, just another poison-pen letter from Charlotte, simperingly sweet as she accuses some innocent couple of belonging to a cult, abusing their own children and others, and refers the recipient—a work colleague—to Hamster Research’s disgusting videos for more of the gory details.

Of course, as far as we know, whoever has targetted Angie hasn’t printed the letter on a blog for the entire world to see for the rest of time, but we’re sure that was just an oversight.

Now, we would never rejoice in the pain of another, but we have to say that it’s just a tad ironic that Angie should be the victim of the sort of campaign she used to help run, and probably still would, had Charlotte not called it quits.

Except, you know, without all the accusations of baby-killing and child-raping and murdering. At least, so we assume.

Still, it’s somewhat reassuring to know that there’s such a thing as karma, isn’t it?