It was brought to our attention this morning that the much-touted ‘forensic linguistics expert’ who Charlotte Ward and others have claimed will destroy the credibility of the Hoaxtead children’s retraction to the police is, in fact, merely a student…and that interested parties currently have only a day remaining in which to comment on the paper he plans to present at a conference in Germany.

A bit of poking around on Google took us to Mr Popoola’s Tumblr blog, where he describes himself thus: 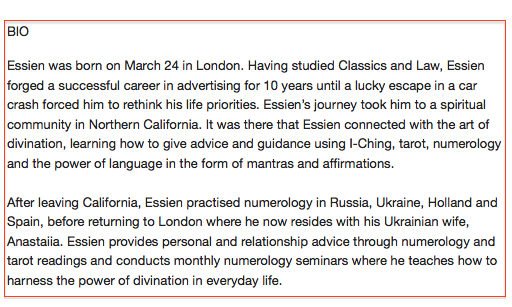 So…an ex-advertising professional whose spiritual journey led him to a new career in numerology and tarot readings. Hmm.

Here’s some of what he says about himself on another section of his Tumblr blog:

I’m a teacher, DJ and pop-up art gallery director. I trained my clairvoyance sense myself because I was interested. I got into tarot and numerology and I went in so deep that for a time I was gambling heavily on sport – and winning!

After the streak came to an abrupt end, I realised that I couldn’t use clairvoyance for such purposes. The best thing I could do was coach and teach people. So Now I do readings, seminars and courses training people to use clairvoyance in their lives.

This is starting to remind us of another so-called ‘professional witness’ that the Hoaxteaders dredged up: remember Ray Savage, the alleged ex-cop who uses the time-honoured criminal investigation technique of dowsing rods to determine the guilt or innocence of suspects?

We wondered whether Mr Popoola had any prior connection to the Hampstead case, which might possibly create bias in his work. We found it:

So Mr Popoola is apparently good buddies with Angela Fag-ash Power-Disney, and friendly enough with the notorious liars and criminals at Hampstead Research to be involved in one of their infamous videos?

We’ll leave it to you to determine the academic objectivity of Mr Popoola’s latest work. From where we sit, though, we can detect a strong odour of bullshit.

20 thoughts on “‘Forensic linguist’ or fortune-teller? Another Hoaxtead ‘expert’ debunked”