Is she trying to set a new world record? Is she monumentally stupid? Or is it possible, as commenter Anna suggests, that Sabine suffers from some form of “Hampstead Tourette’s”?

What part of “shut the fuck up” does she not understand? 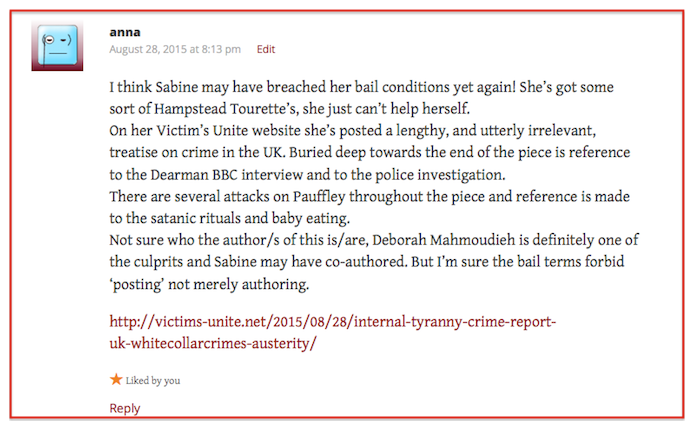 “I think Sabine may have breached her bail conditions yet again! She’s got some sort of Hampstead Tourette’s, she just can’t help herself. On her Victims Unite website she’s posted a lengthy, and utterly irrelevant, treatise on crime in the UK. Buried deep towards the end of the piece is reference to the Dearman BBC interview and to the police investigation.

There are several attacks on Pauffley throughout the piece and reference is made to the satanic rituals and baby-eating.

Not sure who the author/s of this is/are, Deborah Mahmoudieh is definitely one of the culprits and Sabine may have co-authored. But I’m sure the bail terms forbid “posting” not merely authoring.”

If you feel like slogging through paragraph after turgid paragraph full of pseudo-legalese troofer-speak, you can take a look at Sabine’s latest folly here:

But ah! I hear some object: this was written by the frothy-mouthed Deborah Mahmoudieh, not Sabine at all!

It’s published on a blog that’s owned and run by Sabine. Sabine published it, she’s responsible for it…and when her trial rolls around in October, she’ll no doubt find that this, too, will turn around and bite her in the arse.